Motherwell knock Hamilton out the Cup

Motherwell were given easy passage into the fifth round of the Scottish Cup as Hamilton were eliminated at Fir Park.  The early gift of an own goal was bettered by a needless penalty resulting in a 2-0 derby win for the Mighty ‘Well.

Hamilton offered very little and Motherwell took advantage.  Although the play was one-sided we needed some help from the opposition to find the net.  Still, as Stephen Robinson said after the match, “we’re happy to take any gift”. 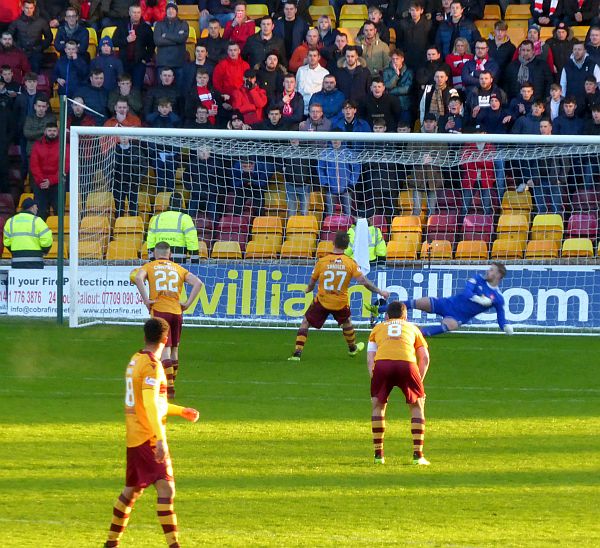 The three new signings made successful debuts with Curtis Main drawing most compliments.  The big striker looked eager and caused a few problems for the Accies’ defence.  Tanner was rightly awarded the man of the match award but the biggest cheer of the afternoon came when Stevie Hammell came off the bench.

It was a bizarre opening bonus to send us on the way.  With only four minutes on the clock McMann, under no pressure, elected to send the ball back to Woods from his left-back position.  The ‘keeper was wrong footed and the majority of the 4,729 cheered the ball on as it ran into the empty net.

Dunne had a header on target before Main was given a chance following good work from Ciftci and Campbell but the new man fired high into the South Stand.

Accies compounded their defensive blunder just after the half our when Gogic tripped Main inside the box.  Tanner drove low from the spot to give us a comfortable buffer that never looked like slipping.

Carson was brought into action twice before the break and he produced fine saves from Binghan’s header and Templeton’s shot.

There was little goalmouth action in the second half but we were able to evaluate our revamped side.  Main looks like a decent worker and Ciftci showed enough to suggest that he will deliver plenty as his fitness improves.

Aldred looked like forming a decent partnership with Kipré but his game ended early after he grasped his hamstring in the first half.

We can anticipate Sunday’s fifth round draw and another cup tie on the weekend of 10 February.