Motherwell leave Tannadice with nothing

Despite the lifeline spot kick that offered a chance of a point Motherwell conceded late and left Tannadice with nothing but four bookings.  It was a performance short of flair and inspiration and completes a three game losing run. 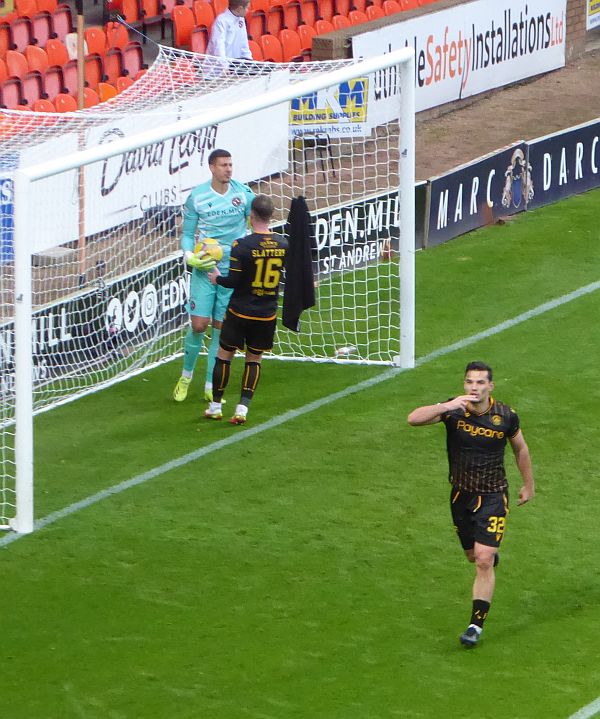 Motherwell lined up in the black away strip as United got the game underway.  Kevin Van Veen was restored to the starting eleven as Jordan Roberts stood down.

There was almost a dream start.  Tony Watt collected the ball deep on the left wing and fore the home defence got organised Sean Goss got a shot away from 12 yards. Siegrist was happy to concede a corner.

Van Veen grabbed the ball when a free kick was awarded 25 yards out in a central position but his effort was high of the postage stamp corner.

The hosts steadied themselves and played their way back into the game.  There was little goalmouth action at either end though Bevis Mugabi gave his team a scare with a careless slip.  He recovered at the cost of a corner.

United earned a half time lead when a free kick was swing in from the left wing y Mulgrew.  Stephen O’Donnell failed to cope with Ryan Edwards at the back post.

There was a shout for the equalised two minutes later but Ojala was judges to have fouled as he headed home.

Liam Grimshaw took a flyer when the ball broke to him but his 20 yards shot flew into the empty shed.

The game was even after 70 minutes following a sustained spell of Motherwell pressure.  Three corner had tested the home defence but following a long throw-in from O’Donnell Siegrist threw himself with arm outstretched to clear.  He bundled into Watt and the referee pointed to the spot.  Watt made no mistake.

The balance did not last long as Mulgrew popped up at the other end to claim the winner.

Three Motherwell substitutions made little difference and tame was lost.

Next up is the visit of St Mirren on Wednesday.