Motherwell threw away a two goal lead at the break and had to settle for a 2-2 draw against Rangers at Fir Park.  A spot kick from Main and a composed finish from Campbell gave us control but the game turned with a dodgy penalty decision that gave the visitors hope.

It was not a surprise to see the same eleven that had drawn with Celtic in the last outing be given the chance to deliver a repeat performance over the other big Glasgow team. 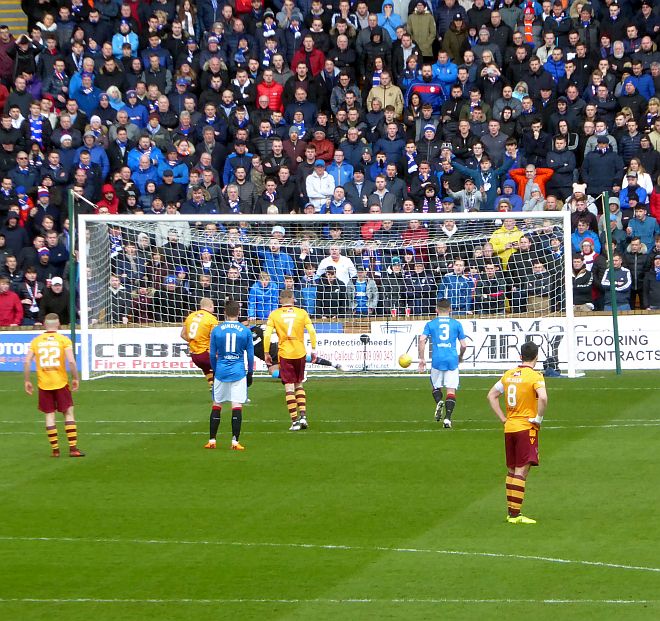 Our first half performance was as good as any this season.  We dominated Rangers and won every man v man decision.  We pushed Rangers back from the start and got an early reward when Main’s strength held off his marker.  Cadden collected but was bundled to the ground by Martin.  Main struck home from the spot to give us the lead after 8 minutes.

Main was in great form and he set up Campbell on the right side of the box in 16 minutes.  A well placed shot to Foderingham’s right doubled the lead with the midfielder’s second goal of the season.  We were flying and it seemed that Rangers had no answer.  We pressed, chased and harried to recover the ball and quickly delivered to Bowman or Main.

Twenty five minutes had passed before Carson was forced to save as Murphy’s shot was pushed to safety.  Cadden flashed a shot off the bar as we threatened to close the contest.

But our momentum failed to carry through the interval.  Rangers looked more composed and we were forced deep.  Within five minutes the game was level.  Frear was penalised for a foul against Tavernier and a penalty was awarded.  Doubts about the award seemed to be confirmed by those who had the benefit of a TV replay.  Momentum was now in front of the big travelling support.

Murphy produced a fine equaliser two minutes later.  His movement was all too familiar as he ran parallel to the 18 yard line before planting a low drive to Carson’s right.

Motherwell had to stave off a series of attacks and rarely reached the opponent’s area.  Main struck the junction of post and bar with a fine curling shot but there was to be no further scoring.

A draw was probably a fair outcome but given our half-time advantage it was a disappointed home crowd that felt robbed of the chance of celebrating a first league win over Rangers in 15 years.