Motherwell conceded five to Rangers at Fir Park. The gift of an own goal hardly mattered. 5-1

Three goals lost in the first half and another couple in the second indicated the gulf between the teams.  The visitors at least had the decency to give us a consolation late in the game.  The loss of the seventh and eigth penalties of the season inside the first half hour delivered a killing  blow. 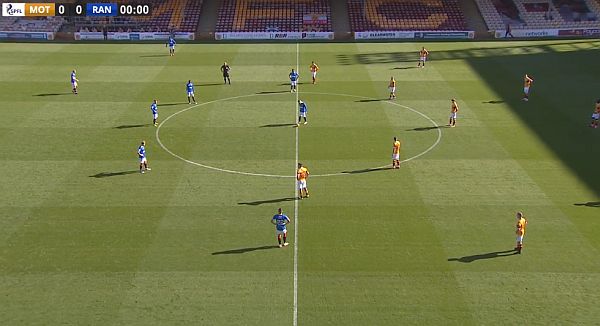 The tactical switch of ends did not work

We won the toss and with the sun sending shadows from the south  elected to attack the Cooper end.   Bevis Mugabi and Callum Lang got the nod as Chris Long and Nathan McGinley dropped to the bench.

Trevor Carson was called into action inside the first minute and he produced an excellent one handed stop to prevent a Morelos header sneaking in at his right hand post.  But he was unable to prevent Tavernier's penalty kick ten minutes later.  Mugabi had been penalised for an unintentional handball.

There was no complaint about the second goal.   Jordan Jones easily outpaced Ricki Lamie on the flank before he drove into the area.  A low drive to Carson's right hand corner made the score 0-2 before the half hour.

Worse was to come.  Bobby Madden spotted the ball deflect of the arm of Liam Grimshaw as it was tied to his chest.  Tavernier choose to go to Carson's left this time. 0-3.

A couple of substitutions at the start of the second half (Maguire for O'Donnell and Lang for Polworth) barely altered the flow.  Alan McGregor continued his impression as a spectator.

Sherwin Seedorf and Jordan White were added to the mix and we began to make some appearances in the opposition half.  Rangers added another when Cedric Itten blasted into the net from 20 yards.

The Swiss forward slipped in the fifth goal from close range when the ball fell to his feet after a corner.

Sherwin Seedorf can claim an assist as he watched his driven corner end up in the net when Edmundson headed an own goal.