Motherwell lost 3-1 at a cold wet Easter Road as Hibs earned a win for their new manager.  Liam Polworth gave us an early lead but we were behind by the break.  The opposition took their chances, we did not.

A strong penalty claim was not given in the second half when Polworth seemed to be clipped and that, together with some slack defending and an inability to convert chances, sealed our fate. 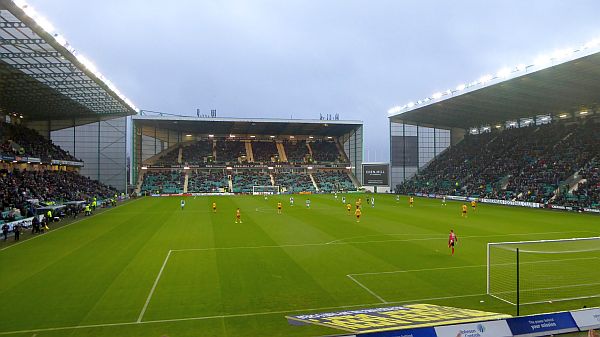 Floodlights on at 3pm

Stephen Robinson produced two changes from the side that lost at Parkhead as he introduced Jermaine Hylton and Peter Hartley back to the starting line-up.  Richard Tait and Bevis Mugabi made room.  The expected return of Liam Donnelly was scuppered as the midfielder reported with an illness on Saturday morning.

Scott Allan tested Mark Gillespie in the first attack of a game that was to rage from end to end.  Our lead arrived when Jermaine Hylton produced some magic on the left.  He skinned a couple of defenders and cut the ball back to Chris Long.  The shot came off the post to present Polworth with an easy finish. It was a great start but we were unable to build on the advantage.

Both of Hibs’ first half goals came from poor ‘Well defending.  Chris Long gave up on tracking his man and the ball was driven across the box.  Newell returned it to the opposite post where Christian Doidge was on hand to bundle over the line.

Four minutes later we conceded again.  Florian Kamberi seemed to take an age to find space inside our box but the defenders failed to block his shot from crashing into the net with Gillespie helpless.

Motherwell played well out of defence but there were regular cries of anguish from the away fans as midfield passes went astray.  Jake Carroll fired a powerfull shot that Maxwell was happy to parry for a corner.

After the break Doidge forced a fine save from Gillespie before referee Beaton turned away from our strong penalty claim.  Hylton headed wide of target as we produced a series of half chances.

The manager introduced Sherwin Seedorf, Mark O’Hara and James Scott as we threw everything forward. The cruel finality came when Hibs swept forward on the break to end the contest with Daryl Horgan’s goal.

Some will argue that we deserved a point but we left empty handed.

Next up is a return to Fir Pasrk when St Johnstone visit on Saturday.