It was a familiar tale for Motherwell as they lost 3-0 to Celtic at Parkhead.

There will be some praise for Motherwell’s attempt to sneak something from the game but there was never any doubt about the final outcome.  Celtic were kept out for most of the first half but a goal before the break and a couple of late strikes sent us into the international break firmly rooted to the bottom of the table.

Motherwell got the game underway with Liam Polworth on the centre spot.  Tony Watt started the game as the only alteration from the eleven that took to the field against Glentoran.  Callum Lang moved to the bench.

Liam Grimshaw moved across field to the left allowing Stephen O'Donnell to take up his favoured position on the right.  Bevis Mugabi, Declan Gallagher and Ricki Lamie formed the back three.

The visitors made a good start by limiting threats on Trevor Carson's goal and by holding possession fairly well.  They were encouraged with a few incursions into the Celtic area.  Mugabi added to his impressive defensive display with a powerful midfield run that was ended with a booking for Scott Brown.

With the haven of half time within sight Celtic scored.  A Motherwell attack broke down and McGregor powered up his left wing.  He found Forrest right of centre and the winger shot into the net from the edge of the penalty area.

We had a chance in the additional minute but Chris Long drove against Barkas.  The resulting corner was headed over the bar by Mugabi and the referee ended the half. 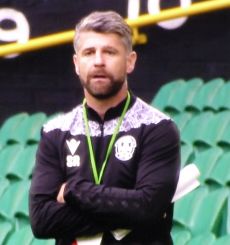 Callum Lang was introduced after 58 minutes and Watt was withdrawn.  The game continued with Celtic still looking the more likely to score.  Ten minutes later Stephen Robinson decided that a change of shape was required.  Lamie came off and Jordan White became the third Motherwell striker on the pitch.  The adjustment had us in 4-3-3 formation.

The gamble did not keep Celtic out for long.  Ajer was left with too much room and he collected and fired the ball into the net from the middle of the box.  The chance of an unlikely point disappeared.

Grimshaw managed a shot on target as we pushed for a late consolation.  Two minutes into added time brought a third goal when Julien drove low to Carson’s left.  It was a score line that reflected the balance of play but a tough one for a hard working Motherwell team.