Motherwell lose to Dundee in the League Cup

Motherwell's involvement in the Premier Sports Cup ended with a 1-0 defeat at Dens Park.

Although Dundee had the balance of play Motherwell had two clear cut chances to take the lead in a game that always looked like a ‘first goal the winner’.  Both fell to Connor Shields and the young striker will want to avoid looking at video replays. 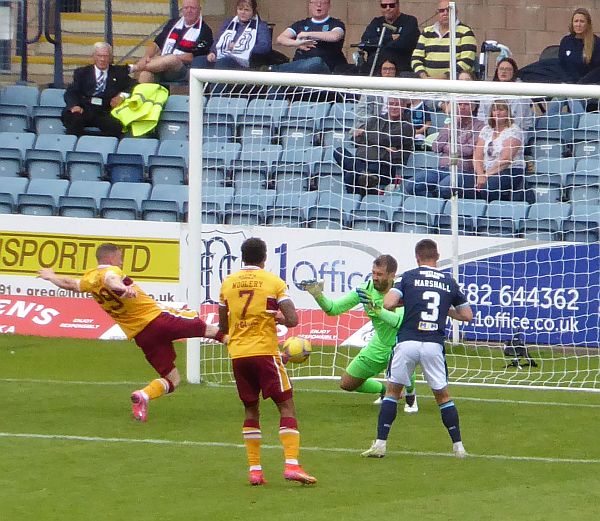 Motherwell kicked off without captain O’Donnell, Kevin Van Veen or Bevis Mugabi in the line-up.  In came Juhani Ojala, Liam Grimshaw and Steven Lawless.  There were a few comments of concern in the away support and those fears were confirmed by the end of the afternoon.

There were corners at both ends of the park early on though the majority came at Liam Kelly’s end.  Still, he had only a couple of routine stops to make before the break as Dundee failed to benefit from their better possession.

The new centre back found himself in the opposition box after half an hour but his header did not produce a debut goal as it sailed over the bar.

Motherwell had a golden opportunity to take the lead five minutes before the interval.  Lee Ashcroft was robbed by Lawless on the halfway line and a break was underway.  Lawless passed to the unmarked Shields on the penalty spot. The striker took a touch, steadied himself and with a thousand travelling fans on their feet in expectation he fired the ball off the bar.]

Ojala had the excellent Kelly to thank for sparing his blushed a few minutes into the second half when he mistimed a jump to allow Dundee to swarm into the penalty area.  Somehow the ‘keeper managed to keep his goal intact.

Shields had the more difficult of his chances when he attempted to prod the ball beyond Legzdins from point blank range but the chance was missed.

The manager rang the changes and brought O’Hara, Watt and Amaluzor off the bench but the substitutes saw the loss of a goal after 77 minutes.  Dundee had seventeen corners in the match and it was that route that led to the winner.  Lee Ashcroft got his head to the ball and the game was lo