Motherwell lose to Hamilton for the third time this season

Motherwell were made to pay a heavy price for a horrible performance against Hamilton at Fir Park.  The visitors deserved their 4-1 win.

This was the worst of a bad season by some way.  Motherwell were well off the pace from the start and looked stunned well before they realised that they were three goals down and a man short after half an hour. 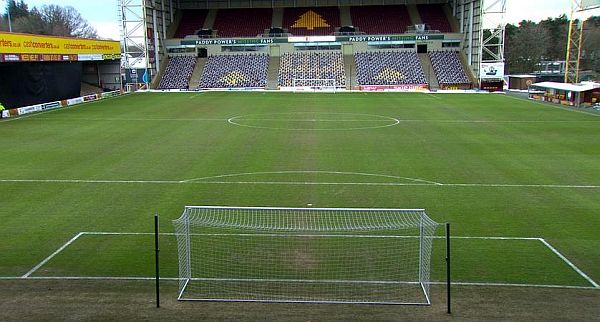 Mark O'Hara returned to the starting eleven as Robbie Crawford moved to the bench.

Motherwell's collapse started with the simplest of goals after 7 minutes.  Hamilton had a throw-in on the left and shuffled it before a low ball was prodded across the penalty area.  Bevis Mugabi was unable to cut it out and Bruce Anderson took his chance to drive beyond Liam Kelly.

The second came after a further ten minutes.  Stephen O'Donnell manhandled Ross Callachan as he attempted to head the ball from close range.  There were no complaints as the penalty was awarded and the captain was dismissed.  Callachan fired the ball into the net twice - a retake was ordered as O'Donnell had not yet left the pitch.

The team was now in full disarray mode.  A third goal followed when Marius Ogkmpoe reached a though pass with Mugabi unable to intercept.  The strike leat Kelly from the edge of the box.

The manager reacted by withdrawing Christopher Long and switching to a back three with the introduction of Tyler Magloire.  The relief of the break arrived without further loss.

Number four arrived moments after David Moyo came off the bench.  He produced a well directed near post flick and the ball flew into the net.

Tony Watt and Devante Cole worked hard with the few opportunities that presented and one such led to a penalty.  Cole was hampered by Brian Easton and Mark O'Hara converted the spot kick.

Mugabi was relieved of duty to give young Max Johnston a debut.  Graham Alexander joined the shoddy performance by collecting a second yellow card and he had to see out the end of the rout from the stand.

Thankfully Motherwell have no game this midweek.  It will take some time to flush this disaster from the system.