Motherwell miss a beat and draw 3-3 with Hibs 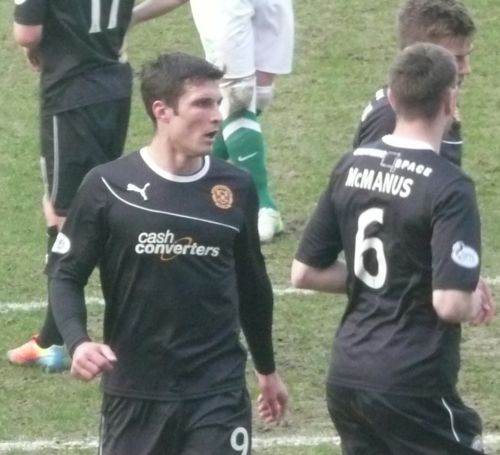 We looked so comfortable after half an hour with goals from Sutton and Ainsworth on the scoreboard but Hibs fought back and turned the tide.  All looked lost as we entered the final ten minutes a goal down but a late scramble inside the six yard box gave Sutton the chance to throw his head at the ball to salvage a point.

Motherwell lined up defending the drumless end with Murray given his first start in and making the best of the opportunity given the absence of both Hammell and Francis-Angol.  Reid was once more at right back and with Leitch retaining his midfield position it we had a younger look than usual.  We finished with Cadden and Moore joining the fray.

Hibs made the better start and pushed us back for the first ten minutes without putting any pressure on Hollis but it was thanks to some cool play in the centre circle from McManus that we scored the opener in 12 minutes.  The defender resisted the temptation for a long pass and fed McFadden who delivered to Ainsworth on the left.  The winger duly delivered a telling low ball across the face of goal and Sutton pounced to score his fifteenth of the season.

The ball was trapped in the middle of the park for long spells and neither side was able to command.  A moment of brilliance lit up the game as the half hour approached.  Ainsworth collected 25 yards out and nutmegged his minder Nelson.  He followed up and curled a right footed shot to Williams’ left and into the net.

The home side were desperate to get a toehold before the break and it came when Forster headed a cross from our right following a cleared corner.  They could have drawn level in the added minute but Hollis managed to touch a shot beyond the post before Forster missed an easy header from the following corner.

Butcher seemed to deliver the better half time talk as his side made their intentions clear within a minute of the restart.  Collins hit the post and Hollis was happy to collect his second effort from the rebound.  We held on until 75 minutes before Hibs equalised.  A Nelson header following a corner undid us.  We never looked comfortable dealing with their set pieces.  The home support raised the roof five minutes later when Heffernan collected the ball wide on the right side of the box before blasting high into the net.

By this stage Moore had replaced Ainsworth and Cadden was on in place of McFadden.  Faddy produced an exciting run from the centre circle just before his substitution but his shot flew high and wide.

We piled into the box as time ran out and with the dreaded 90 appearing on the stadium clock we were awarded a free kick on the halfway line.  Hollis delivered it and the partial clearance eventually earned us a throw in. Vigurs collected on the left of the boxand after some neat footwork he chipped into the centre and following a spell of chaos the ball popped up to give Sutton the chance for the final piece of drama.  He headed home from close range and the point was rescued.

The players have a couple of weeks to mend the bumps and bruises before we start a three home game run with Inverness next up on Wedensday 19 March.