Motherwell move up after a 2-0 win over Kilmarnock

There were three changes in the Motherwell line up as the manager offered starts to Steven Lawless, Jake Hastie and Sam Foley.  Mark O'Hara was not in the squad and Tyler Magloire and Robbie Crawford dropped to the bench. 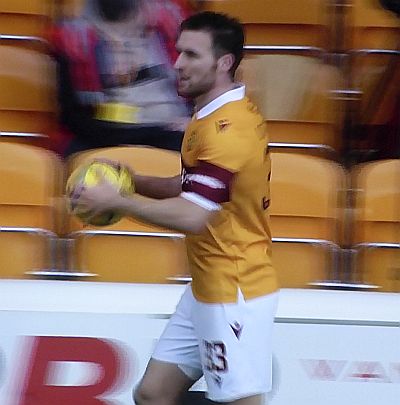 Hastie had the best chance of the first half when he finished off a wonderful passing move that involved half the team with a header over the top from eight yards.  Motherwell's possession football delivered the balance of play and despite a 20 minute deluge decent control of the ball created several worrying moments for Danny Rogers.

Kilmarnock tested Liam Kelly after 36 minutes when Mitch Pinnock tried his luck from 20 yards but the 'keeper was up to the test.

Motherwell's good play found its reward a couple of minutes after the break.  A powerful midfield run from Foley led to an interchange between Devante Cole and Chris Long that ended when Cole curled the ball beyond Roger from 18 yards.  It provided a lead that first half play deserved.

Tommy Wright responded  with a triple substitution and the game started to turn in the visitors' favour.  Motherwell lost the momentum and had to fend off a series of crosses.  Kelly had to pull off one of his trademark quick reactions save when Lafferty shot from 15 yards.

Motherwell reacted with a series of defensive changes and faced off repeated attacks.  But the remaining goal came at the Cooper end.

Cole produced some fancy footwork at the angle of the box and squared the ball across the six yard line to find Stephen O'Donnell arriving to drive the ball into the net.