Motherwell gave Queen of the South a two goal start but a fighting second half produced three goals and a 3-2 win.

There might have been a few tears of joy as the ‘Well crowd welcomed the team on to the perfect Fir Park pitch but there were boos aplenty as the players left the field at half time.  Possession counts for little if you don’t score and The Doonhamers made the best of their few chances as they found the net twice as the break approached.  A more determined attitude in the second period turned the game around. 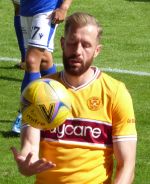 Kevin Van Veen impressed on his Fir Park debut and he earned the man of the match award.  He had at least three goal bound efforts that were cleared off the line and was cheered of the pitch when he was replaced late on.

The visitors dug in from kick off and conceded possession without a challenge until the last third.  Stephen O’Donnell and Jake Carroll had the freedom of the flanks as the ball was passed around with confidence.  Much of the rustiness that was apparent at Firhill in midweek was gone yet scoring chances were few.

Rae had to wait midway through the have for his first save when KVV collected O’Donnell’s throw-in before shooting on target.  The striker then saw a well placed header force the ‘keeper to react.  Tony Watt rattled the bar but there was no breakthrough.

There were occasional breaks to the Cooper end and after 40 minutes we conceded a free kick wide on the right.  The ball was knocked on and fell to Ruari Paton in space at the angle of the six yard box and he returned the ball across Liam Kelly and into the net.  The goal was met with silence as he celebrated. 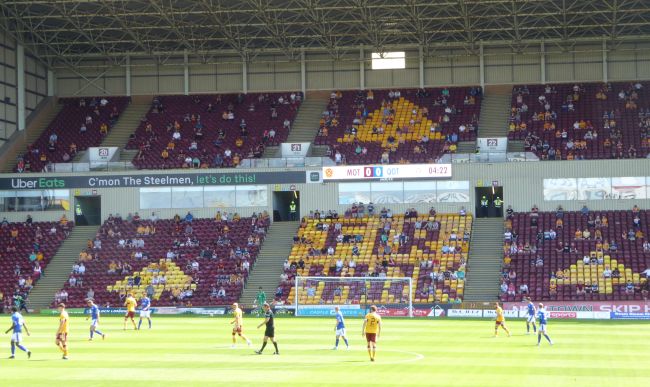 Worse was to follow when a poor attempt at a clearance from Darragh O’Conner was deflected wide to Paton.  His 20 yard effort deflected beyond Kelly and we were two down.

The gloom was lifted a few minutes into the second half.  KVV won a corner and Watt was on hand to bundle the ball over the line in the packed box.  Spirits were lifted and the sun drenched crowd urged the players on.

Van Veen shot high from close range before he forced a clearance off the line after Carroll set him up for great chance.

Kaiyne Woolery replaced Liam Donnelly and his pace immediately posed problems for the defence.  In 72 minutes Steven Lawless send in an outswinger from a short corner and Ricki Lamie rose high to head in the equaliser.

The game was won two minutes later when Woolery’s drive from outside the box was helped into the net thanks to a slight deflection.

KVV though he had scored when he lobbed Rae be another goal line clearance robbed him.

Motherwell top the group and travel to Airdrie on Wednesday.

Motherwell 3 Queen of the South 2