Motherwell and Livingston played out an uninspiring 0-0 draw at the Tony Macaroni stadium where the only winner was the rubber pitch.  We’ll be happy to play on grass next week.

We will not be the only team to struggle for fluency in Livingston.  A point away from home is rarely a poor result and in a game that was fairly short of goalmouth incident both managers may be satisfied. 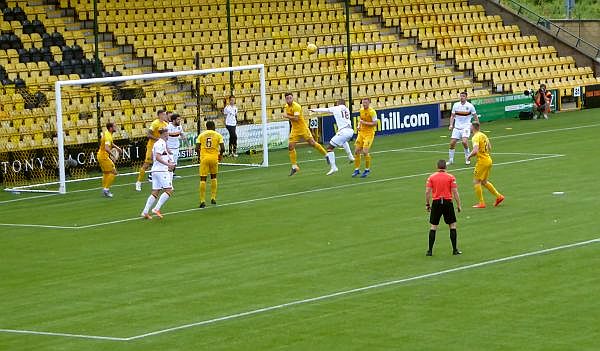 With the experimental phase of the Betfred Cup complete Stephen Robinson revealed his top eleven in the Almondvale sunshine.  Mark Gillespie had Richard Tait, Declan Gallagher, Charles Dunne and Jake Carroll in front with Liam Donnelly, Allan Campbell, Liam Polworth, Christian Ilic and Jermaine Hylton tasked with keeping up a supply to James Scott in the striking position.

Motherwell fans turned up in good spirits and got an early boost as David Turnbull, looking in fine control of his crutches, made his way around the pitch to join them just before kick-off.

We got the game started and earned a corner within ten seconds but the rehearsed move was bungled.  A feature of the early action was the number of long diagonal balls that flew from Carroll at left back to Ilic on the right wing but there was nothing close to a thrill until Ilic managed a shot on target ten minutes before the interval.

We followed that up with the first real chance. It followed Hylton’s lovely inside pass to set Carroll up with a shot from a tight angle close in.  Stewart got a firm hand to defect the ball to safety.

Livingston then forced Gillespie into action, first from an impressive overhead kick from Souda then he had to rise to a downward header before he produced an excellent block from Pittman to let us into the safety of the dressing room at 0-0.

Sherwin Seedorf replaced Christian Ilic as the teams returned. The latter’s yellow card may have influenced Robinson’s decision.  The winger sent in a teasing cross within a minute and his fleet of foot soon gave the left sided defenders some problems.

Richard Tait had a clear sight of goal after 65 minutes but his shot was weak.  The game continued with long balls the favoured tactic for both teams.  The rubber pitch did no favours to players trying to play the running game.

Gallagher saw a half chance header fly high as the clock ticked down but after three additional minutes the game ended without a goal.