Motherwell pay the price for a slack performance in Airdrie

Motherwell can have no complaints following a 2-0 Premier Sports Cup defeat to Airdrie.  The League One side deserved the win.

The home side took the game to their senior neighbours and with wholehearted commitment and a couple of wonderful strikes they leap above Motherwell in the Group F table. 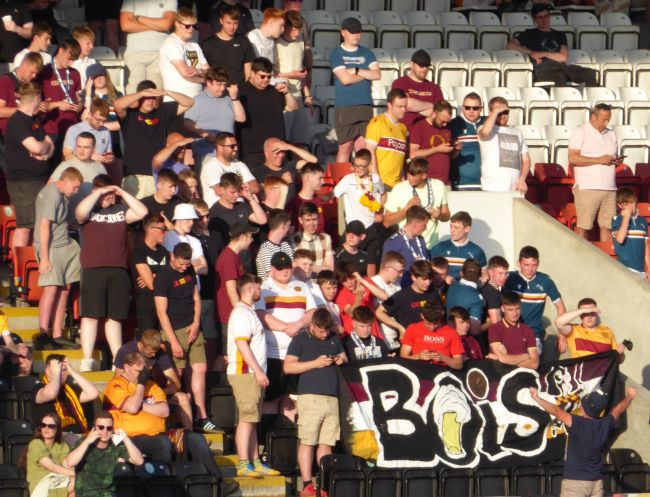 'Well Bois in the sun

The game kicked off with the fans, housed in opposite stands, exchanging the expected pleasantries as they renewed old time rivalries.  The home side kicked off an in under a minute launched a long throw into the ‘Well box but the header that followed flew high of the bar.

The first half was full of effort but little end product.  Neither ‘keeper had to save a direct shot though both sides gave their supporters occasional moments of anticipation.  Motherwell held the ball better but to no great effect.  The best chance fell to Tony Watt with a free kick just outside the box but with the visiting support chanting his name he blasted the ball high into the empty stand.

The first clear chance fell to Josh Kerr.  He had time to steady before firing a powerfull shot from the angle of the six yard box but Liam Kelly stood tall to beat the ball away.  It was a warning that was not heeded.

Airdrie were awartded a free kick 30 yards out in a central position st after the hour.  Robbie Crawford left the field as Kevin Van Veen was sent on to boost the attacking options but disaster was to follow.  In contrast to Watt’s earlier attempt, Rhys McCabe unleashed a pile driver straight into the postage stamp corner and the home fans were able to celebrate.

The contest was over and Motherwell have some work to do on Saturday to ensure they progress to the knockout stage.