Motherwell pay the price for poor performance at Dundee

Motherwell failed to turn up at Dens Park and Dundee took advantage to hand the visitors a 3-0 defeat.

The contrast between the energetic and determined display offered by Motherwell last week and this unfocussed and feckless showing did nothing to warm the travelling fans as they shivered in the Tayside chill.

There was only one change in the away line-up as Sean Goss missed out in favour of Liam Grimshaw.  Motherwell got the game underway but it soon became apparent that the home side looked more likely to command proceedings. 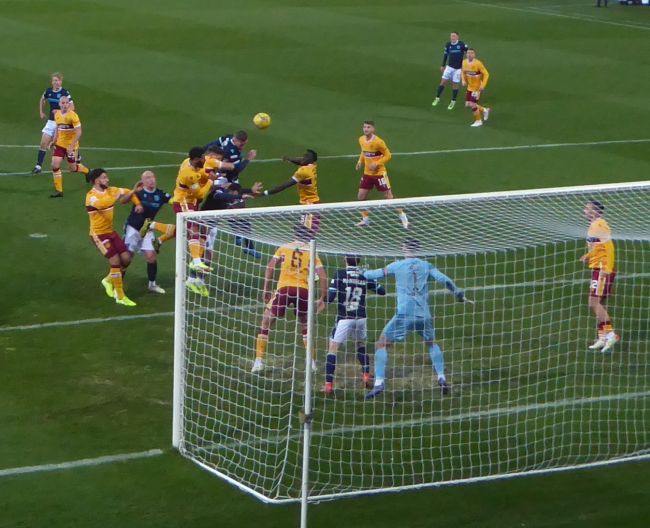 Motherwell had a lot of defending

The early warning signs were there.  Danny Mullen failed to connect at the far post with the goal gaping then Liam Kelly was relieved to see a shot whizz by his right hand post.  The first of Dundee’s trio came in 19 minutes when the ball fell to Luke McCowan just outside the penalty area.  The defenders stood off him and he was able to fire though the crowded box to take the lead.

Motherwell’s defenders were rattled and uncomfortable and they were pinned  back immediately as Dundee sensed their opportunity.  Kelly was called into action following a couple of corners but six minutes after the first he conceded another.

Danny Mullen made no mistake as he was presented with a free shot ten yards out on the right.

Half time arrived with Motherwell yet to have an attempt at the other end.  Any forward play consisted of long balls with little attempt to pass through midfield.  The home defence lapped it up.

Kevin Van Veen and Jordan Roberts replaced Connor Shields and Grimshaw as the game resumed.  In truth any of the ten out-field players could have been hooked.

Van Veen had a bright start and produced two shots on Legzdins’ goal, the first striking the junction of post and bar.  Unfortunately Dundee went on the attack and won a free kick.  Charlie Adams delivered and Ryan Sweeney was on hand to mop up and end the contest.  The hoped for revival was dead.

Motherwell pushed forward in hopes of a revival but without real conviction.

All they earned were three yellow cards and a long journey home knowing that they were far from their best.