Motherwell retake third with a win against Kilmarnock

Motherwell regained third place in the table with a 2-1 win over Kilmarnock under the Fir Park floodlights.  Liam Donnelly and Devante Cole scored the goals as we fought hard to overcome the ten man opposition.

We made a hard job of it.  Killie had a man sent off and we were a goal up inside the first fifteen minutes.  Instead of running away with the game we found ourselves level at the break after a careless concession.  Intense pressure paid off with after an hour and we held on despite a nervous spell in the closing minutes. 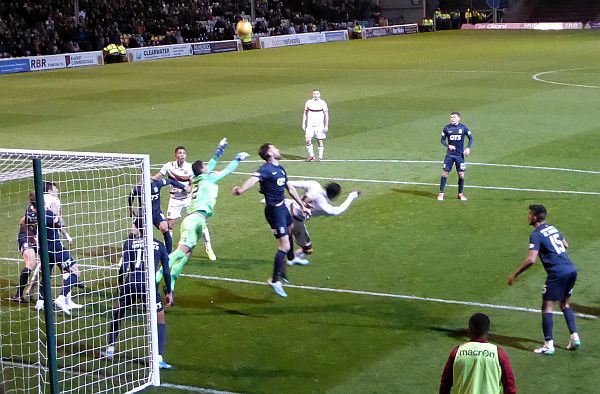 Motherwell attack in the second half

Jermaine Hylton started the game with Bevis Mugabi making way from the eleven that lost in Govan.

Motherwell, in the classy white away strip, kicked off and made their intentions clear from the outset.  Donnelly had and attempt fly over the bar as we settled into the game.  The crucial moment came in fourteen minutes when Chris Long bore down on the penalty area.  Alex Bruce tackled, Long collapsed and Dom Roberston had no hesitation in pulling the red card.

Donnelly took the free kick and the deflected low drive reached the net off Brancesu’s arm.  That should have eased our path to victory and for the next fifteen minutes we ran the show.  It was like watching a game of attackers against defenders but we could not breach the South Stand goal.

In a rare visit to the other end of the pitch Dom Thomas delivered an innocuous half hit cross into the box from the left.  It travelled untouched through the crowded box and into the goal at Mark Gillespie’s right.  It was a fluke goal but it gave Kilmarnock some belief after our sustained spell of pressure.

In the second period Jake Carroll flew a free kick over the bar before the winner arrived in 63 minutes.  Carroll collected the ball deep on the left wing and sent in a perfect cross for Cole to head home from five yards.

We chased a third but it did not materialise.  Sherwin Seedorf and James Scott replaced Hylton and Cole and we made a few chances.

The visitors threw on forwards and we had a nervous closing spell.  Indeed, we had to survive three corners in the three additional minutes before the relief of the final whistle.

No Motherwell fan would have guessed that the Mighty ‘Well would be in third place after the first round of fixtures.  The league table is a tribute to the hard work of players and management in these first weeks of the campaign.  The next job is to add a further three points when Livingston call on Saturday.