Motherwell return to third with a one goal win over Hearts

Chris Long scored the only goal of the game to give Motherwell a 1-0 win over Hearts at Fir Park.  The Mighty ‘Well have returned to third place in the table, a great reward for hard work.

The first half produced very little goal action until the build up and conversion of Long’s goal.  The wind-driven rain swept across the pitch for most of the afternoon but that barely excuses the fare on show for the 5,000 fans. 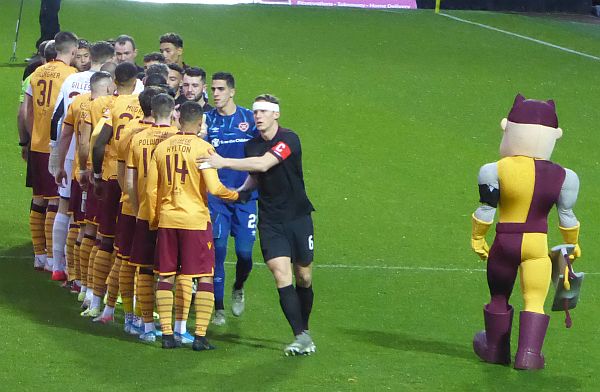 Steelman keeps and eye on proceedings

There was one change to the starting eleven that won in Paisley in midweek, Long came in and Devante Cole was benched.

Hearts set out with defence in mind with three central defenders.  And for the most part the strategy succeeded.  Our attacks were squashed time and time again without much concern.  At the other end Mark Gillespie and his back four were rarely troubled.

The move that delivered the goal was started by Gillespie.  He received a pass back and sent a curling ball towards Liam Donnelly on the left touchline.  The ball was chested forward to Jake Carroll and soon at the feet of Jermaine Hylton.  The winger had tried a few times to skin his multiple markers but on this occasion he succeeded and made progress along the by-line.  A cut back presented Long with clear sight of goal and the ball was propelled high into the net.

In years gone by we might have expected a counter charge for the visitors but this current team are a poor lot.  They battled hard and we stood toe to toe to keep them out.

Long has a decent turn of speed and he used it with twenty minutes remaining to fly down the right wing before outflanking his marker and feeding Liam Polworth.  The midfielder’s placement beat the ‘keeper and was bundled over the line at the post by Allan Campbell but the referee called an offside.

We killed the game in the three additional minutes and the frustration caused Jake Mulraney to receive a straight red card for something he said to the referee.

Motherwell fought hard to keep the lead and the third consecutive clean sheet and deserved the win.  The manager was soon on the pitch after the final whistle eager to hug every claret and amber shirt.

We have taken nine points in a week without conceding a goal.  Just wait till we start playing football for ninety minutes!