We were never at our best throughout the game but as we still held the lead with 25 minutes remaining it looked as though we might grind out a result.  Kilmarnock deserve plaudits for their second half fight and a goal from McKenzie and the late late strike from Slater snuffed out our chance of taking second place in the league table.

McFadden and Carswell were unable even to take a place on the bench and so Francis-Angol and Moore joined the starting eleven.  Kilmarnock kicked off and faced the Cooper end in the spring sunshine and after a sterile opening spell they produced the first chances.  Muirhead and McKenzie tested Nielsen but Motherwell then dominated possession for the rest of the half. 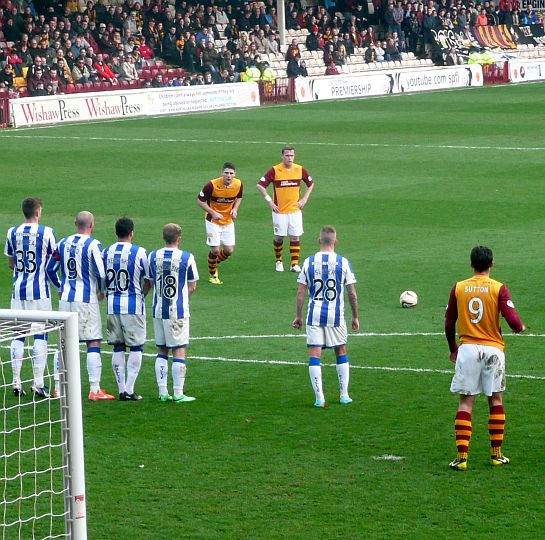 Reid’s headed corner forced a goal line clearance from Muirhead but our opener was not long delayed.  Our attitude to the game was evident from our set up when Kilmarnock had a corner kick.  Ainsworth, Francis-Angol and Moore were kept in attacking positions and the tactic paid off five minutes before the break.  The ball was released and moved upfield.  When Vigurs joined the attack his shot was blocked but Moore gave him a second chance.  Samson got a touch but the drive found the net.

The scorer had the crowd cheering his efforts when he executed a skilful turn on the ball and unleashed a powerful shot that hit the side net.  But it transpired that the visiting manager delivered the better talk over the half time cuppa.

Although we had a few chances in the second period with Moore, Vigurs and Sutton coming close to finding the important second goal, it was the visitors who took control.

In minute 66 a gap appeared in our midfield and Irvine took advantage.  He strode unchallenged toward our box and set up McKenzie.  He beat Nielsen with his shot and the game was level.  Anier and Leitch were produced to help us regain the lead and Francis-Angol and Moore fielded.

A free kick from Vigurs gave Sutton a half chance to convert the spill the Reid had a low drive just wide.  Both teams were pushing for the winner and the game raged from end to end.  The warning signs were there for all to see.  McManus produced a fine block to foil Boyd and as the five added minutes ticked away, Eremenko lobbed Nielsen.  The home crowd were relieved to see the ball clip the bar and bounce to safety.  A moment later the game was lost. We too many defenders out of position Slater grabbed his chance for glory and shot low to Nielsen’s left hand post.  The visiting fans erupted as the ball hit the net and we were forced to face the defeat.

There is a chance for amends on Tuesday when we travel to Inverness but we missed the golden opportunity to take advantage of the Aberdeen v Dundee united draw.  Time will tell what the loss has cost.