Motherwell run out of gas

Motherwell's third meeting with Celtic in a week ended in a 5-1 defeat at Parkhead. The players gave their all but in the face of a refreshed opposition in good form they were well beaten.

It did not take long for the cost of the busy week to take effect. After an early energetic spell we wilted and Celtic ran the game as they wanted. Frear gave us a mirage of respectability with his second half goal but the result was never in doubt. 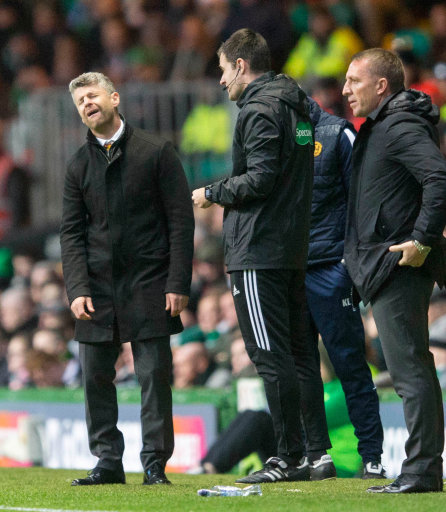 We fielded three changes from the midweek meeting, Celtic made six. Bowman, Tanner and Rose were recalled and McHugh, Frear and Petravicius stood down. Motherwell were in the away strip and Hartley wore the captain's armband.

Campbell kicked off and we were soon in defensive mode. For the first fifteen minutes we pressed the opposition and limited their chances but we were unable to sustain the effort.

Our only chance in the first period followed a cynical tackle from Brown. He took Moult out of the game in the centre circle to end a break. Hewas booked and from the resulting free kick Cadden had a pop from 22 yards, his curler was inches wide of the postage stamp corner.

The home side opened the scoring in 17 minutes when Sinclair crossed low along the six yard line and Edouard beat the defence to help himself to an easy tap in. He scored a second with a clinical strike low to Carson's right from outside the box.

Changes were needed and at the break Robinson chose to switch to 3-5-2. Frear and McHugh came on to replace Cadden and Tanner. But the flow of the game remaineed unchanged. We soaked up lots of pressure but were unable to string more than couple of passes together.

Moult seemed to suffer an ankle knock and was promptly switched with Petravicius. In 65 minutes the travelling fans had their highlight. Tait was in possession well advanced when he reversed to deliver a tempting left footed cross to the penalty spot. Up popped Frear to poke the ball underneath Gordon to reduce the margin.

We managed to lose a further three before the relief of the final whistle came to end the pain. A couple from Forrest and the completion of Edouard's hat-trick completed the rout.

The prospect of a clear week will be welcomed by the tired legs that trudged off the pitch. Let's get back on track at Tynecastle.