The victory that marked Stuart McCall’s three years at the club sees Motherwell in second place in the SPFL Premiership at the halfway stage of the season.

There were four changes to the Motherwell side that lined up in the all black strip. Hutchinson (suspended), Sutton, Lawson and Kerr (hamstring) missed out but that gave McFadden, McManus, Vigurs and Francis-Angol a chance to impress. 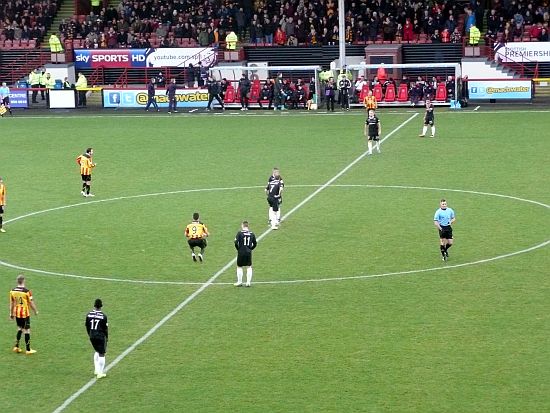 Carswell had the job of patrolling the right back position while Ainsworth joined Anier up front.  The home side took the early initiative and soon were rewarded when Lawless coolly slotted a cut back into the corner of the net from the centre of the box.  Until then we had hardly been in the game.  Lawless almost scored a second with a blistering effort from 25 yards that had Twardzik at full stretch.

The tenth minute produced a well observed round of applause from both sets of fans to mark the sixth anniversary of the passing of Phil O’Donnell and we equalised five minutes later.  Neat work from McFadden at the edge of the box ended with a cute pass to Lasley and the captain passed the ball beyond Fox for his first goal of the season.

Vigurs was on the end of a fine move on the left wing but his header was off target.  However, Fancis-Angol was on target after 15 minutes.  Hammell supplied the pass but there was still work to do.  ZFA cut inside his man, drove into the box and slipped the ball by Fox at his near post.  We had the lead.

Thistle responded by substituting Elliott for Forbes but that didn’t stop us scoring a third.  Anier threw a hopeful ball toward the box where McFadden was lurking.  The defenders seemed to vanish and Faddy had time to place a lob over the ‘keeper.  The game had turned.

McFadden produced a 20 yard dipping volley early in the second half and Thistle replied with a fierce 30 shot from Forbes.  Ainsworth added another in 56 minutes.  Lasley pounced on a loose ball and rolled the ball into Ainsworth’s path from the 18 yard line.  The winger’s effort found the far corner and we were 4-1 up.  Sutton replaced

Faddy was unlucky to see his header strike the bar but the next goal was not long delayed.  The defence failed to deal with a harmless ball and Sutton nipped in to score number five. Ainswoth failed to beat Fox when clean through and Faddy had a curling pop from 25 yards.

The win gives us a positive goal difference (at last!) and sets us up nicely for the two home games against St Johnstone and Inverness later in the week.  Happy days.