Motherwell rounded off the group stage of the Betfred Cup with a comfortable 4-0 over Annan at a rainy Fir Park.  With four wins and no goals conceded Stephen Robinson’s reshaped team can be pleased with their work.

The difference in quality between the Premiership side and their League Two opponents suggested that this would not be a contest and despite the visitors sticking manfully to their task so it unfolded. 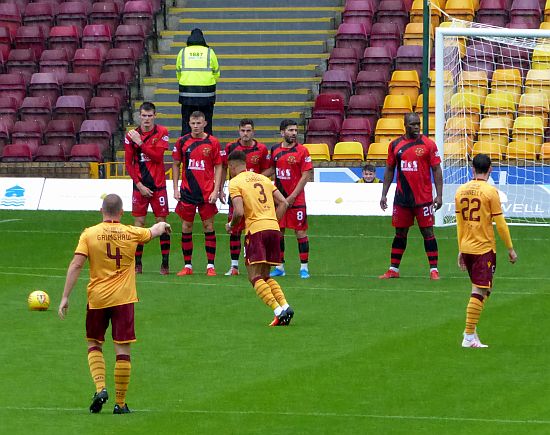 Motherwell shuffled the pack with six changes from the midweek trip to Dumbarton and kicked off facing the 62 travelling fans in the South Stand.

It looked like an early goal was on the way when Jake Carroll whipped in an on-target free kick in the third minute but the ‘keeper managed to make the save.  The opener was delayed until the scoreboard displayed 20 minutes.  A delivery from the right wing was not cleared and the ball fell to Liam Donnelly around six yards out.  The roof of the net bulged as his shot hit its target.

We pushed the ball around at pace and managed to keep a high tempo but chances were few as the red shirts flooded their area.  Liam Grimshaw could not react fast enough to beat Avci from close range but with two minutes left on the clock Liam Polworth scored the second when he pounced on the parried save following Chris Long’s shot.

Robinson used Casper Sloth, Jermaine Hylton and James Scott as second half replacements for Polworth, Seedorf and Long but we did not find it an easy matter to threaten the Annan goal.

Grimshaw made several penetrating runs and one such set up Seedorf but the shot was deflected for a corner.  Peter Hartley managed a couple of powerful far post headers but there was no way through to the goal line.

Two further goals were added in the final minutes.  Donnelly thundered in a 20 yard drive with Hylton the supplier before Scott got his name on the score-sheet with a well placed right footed swerve.

Our defence was rarely troubled but Mark Gillespie made a good save when Annan had their last attempt.

The draw for the second round will be made on Sunday afternoon and Motherwell will be one of the seeded teams.