Motherwell enjoyed a convincing 4-0 win over St Johnstone at Fir Park without playing much in the way of sparkling football.  The return to winning form sets the team up for a busy December.

The crowd waited patiently for some football to break out but in the end they had to take comfort from the result rather than the performance.  Devante Cole, Peter Hartley, Jake Carroll and Christian Manzinga did the damage to a poor St Johnstone side. 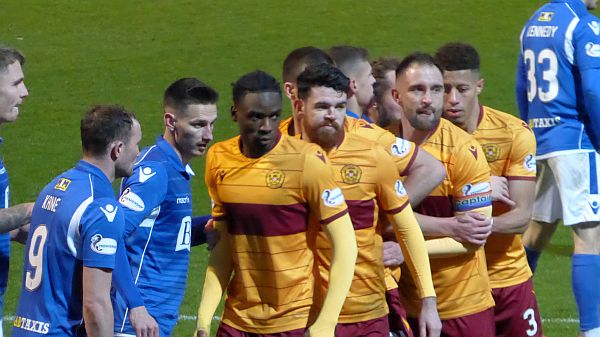 The tone of the game was clear from the outset.  The visitors were happy push forward quickly when in possession but immediately withdrew to a defensive shell when Motherwell had the ball.  Hartley and Declan Gallagher had exchanged dozens of square passes before conceding possession with attempted forward passes before Stephen Robinson appeared with a rant at the touchline.  His frustration was shared as we seemed unable to move forward with any real purpose.

Liam Grimshaw offered some interest as he pounced and charged forward to give Chris Long a pop at the target.  Jermaine Hylton followed up with a shot wide of the post.

The winger set up the opener after half an hour with a well placed chip across goal.  Cole rose above the far post defenders to head us into the lead.

There was no further scoring until early in the second half when Hartley converted Liam Polworth’s corner with a powerful header.  This prompted our best spell of the match as we grasped control and put some sustained pressure of the Cooper end goal.

The third goal arrived with twenty minutes remaining from another corner.  Gallagher won the header and his looping effort hit the post low down.  Jake Carroll was on hand to tap in for his first goal in claret and amber.

Both teams had committed all three substitutes as the game petered out but the best goal of the game was still to come.  With a minute to go Mark O’Hara and James Scott pushed forward and set up Christian Manzinga with a chance of a goal on his debut.  The striker slotted the ball beyond Zander Clark to round of a fine win.

Next up is a midweek trip to Paisley.