Motherwell stumbled past Coleraine and into the 3rd qualifying round of the Europa League thanks to a win after penalty kicks.

All the credit goes to the home side.  Motherwell were two up at the break and miles ahead in terms of control and form but Coleraine had two second half penalties to send the game into a goalless extra 30 minutes.  Mark O’Hara, Stephen O’Donnell and Tony Watt scored in the shootout and Trevor Carson made three saves to give Motherwell a win they hardly deserved. 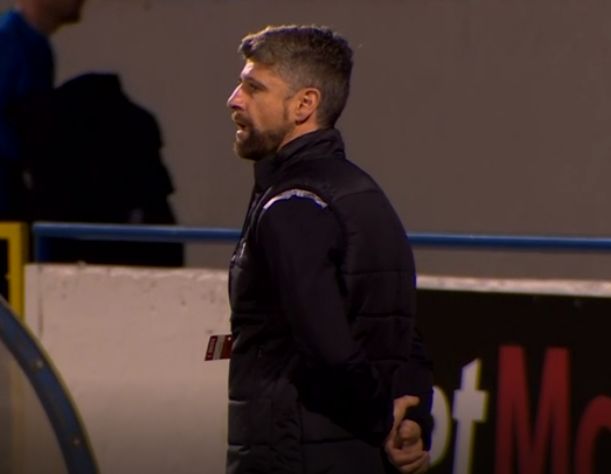 A man with a lot of thinking to do

Motherwell kicked off at the Showgrounds with the same eleven that started against St Johnsone at the weekend and they did not have too long to wait before they seemed to take command of the game.

Right from the start Coleraine were in retreat as Motherwell probed their defences.  The opener might have arrived after five minutes when a frantic scramble followed a corner.

Callum Lang scored in 15 minutes. His first effort rebounded off the 'keeper and he converted from around eight yards.   That should have been the catalyst for an onslaught.

A scrappy period followed as the home side held their own.  Declan Gallagher came close but his lob was cleared from the goal line. Tony Watt doubled the lead a minute later with a low drive to the left corner of the net.  Surely the game was over?

Coleraine started the second period on the front foot and they were rewarded with a penalty when Mark O'Hara was penalised for an off the ball bump in the box.  Doherty made no mistake from the spot.  The hosts took heart and continued to push.  The viewers in Lanarkshire cringed as the ball was bundled into our net on the hour.  Thankfully, it was chalked off.

By this time it was apparent that Motherwell had lost the initiative.  There was no cohesion and an inability to make any meaningful play in advanced areas.

Sherwin Seedorf replaced Nathan McGinley with 25 minutes still on the clock and we switched to a 4-3-3 shape.  The change brought us some relief and there was some welcome action in the Coleraine box.  But as the game entered the last couple of minutes the ball landed in our penalty area.

Coleraine stuck to their task and got a lifeline in 88 minutes when Bevis Mugabi got caught on the wrong side of his opponent.  He was dismissed and Doherty scored his second penalty of the night to level the game at 2-2.  Extra time followed.

O'Hara had to clear off his own line in the second period but it seemed inevitable that the tie would be decided by spot kicks.

Motherwell are through but it was a horrible performance.  The inability to wrap up a game that was all but won in the first half will give Stephen Robinson cause for reflection.

The reward is a trip to the eastern Mediterranean for a thrid qualifying round tie with Hapoel Be'er Sheva.