Careless Motherwell threw away a second half lead by conceding twice to Ross County at Fir Park.  It was a game that Motherwell should never have lost and there will be some soul searching in the home dressing room.

After a poor first half Allan Campbell sparked the game into life on the hour but the visitors switched from defence to attack and Stephen Robinson’s side was unable to shut up shop.  Brian Graham levelled with 15 minutes remaining, Jake Carroll was dismissed for a couple of illegal challenges then Ross Stewart headed home the winner.  It was an awful afternoon in the Fir Park sunshine. 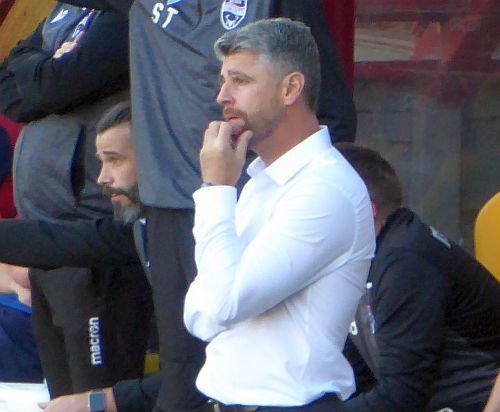 How did that happen?

There was no surprise in team selection.  The manager stuck by the eleven who produced a third consecutive win at Tynecastle last week and we kicked off facing the 179 travelling fans.

The first half was a game of attack and defend.  Motherwell attacked and County defended.  The cutting edge that brought nine goals in the last three outings was missing.  Robinson was to describe us as slow and too safe in his post match radio interview.

Declan Gallagher had the ball in the net with a far post header but the referee ruled that there had been a mysterious infringement.

Motherwell seemed to have more intent after the break.  The breakthrough came in 60 minutes.  Devante Cole delivered the ball to James Scott and the pass to Allan Campbell allowed the hard working midfielder room for a well placed finish from the edge of the box.  What happened next was a Motherwell collapse that no one inside the ground expected.

The visitors threw on all three substitutes and the last of those hit the jackpot.  Graham was in place to receive Micheal Gardyne’s pass and he beat the ‘keeper.  Graham had already scored a couple at Fir Park, his goals knocked us out of the Scottish Cup in January.

Jake Carroll then committed a couple of silly challenges and the two yellows ended his involvement.  The ten men succumbed two minutes from time when Stewart headed into the net from Richard Foster’s cross.

It was a bitter blow to a Motherwell team that had the opportunity to move into second position in the table.  “We had only ourselves to blame” said the manager.  Few will argue with that conclusion.