Motherwell needed a goal in added time from Ross Tierney to snatch a point from St Mirren in Paisley. It was a poor game

Graham Alexander made three changes from the team that lost to Hearts at the weekend. Bevis Mugabi, Sean Goss and Liam Donnelly were introduced as Barry Maguire, Ross Tierney and Jordan Roberts stood down.

There was much discussion in the West Stand about the lack of attacking options on show but eventually w 4-3-2-1 formation was revealed with Goss and Slattery backing up the lone Kevin Van Veen up front. 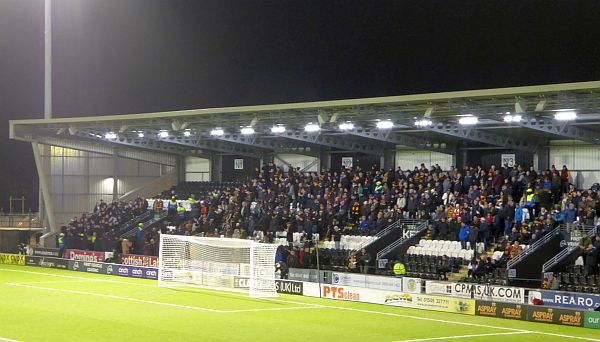 They got a goal to cheer after 91 minutes

The home side had the best of the early exchanges although Goss managed to have a pop from distance.  Sondre Solholm had to be careful after 15 minutes when he cleared a cross over Liam Kelly’s bar.

Eamonn Brophy had to leave the pitch after 20 minutes and Alex Gogic was given his St Mirren debut.  Motherwell then tested Alnwick with a couple of shots on target, again from Goss.  Advantage swung the visitors’ way though no scoring opportunities were created.

Motherwell were then forced into a change when Shaw failed to stem a cut on his head.  Ross Tierney joined the game five minutes before the break.

Tierney had a great chance to score in front of the big travelling support with 52 mininutes on the clock.  He collected in space on the right side of the box but failed to beat the ‘keeper with his chip.  A second attempt was blocked.

Liam Kelly produced one of his trade mark quick reaction saves to deny Tait’s header following a free kick to the back post.

If the edited ‘highlights’ manage to make this match look exciting don’t believe them.  This was a poor game devoid of anything resembling the beautiful game.

Van Veen cracked a shot at Alnwick with 20 minutes remaining but the home side had the balance of play.  They earned a corner after a terrific flying save from Kelly and scored when substitute Gogic headed home.  It was celebrated as a winner in the home stands

Roberts and Kaiyne Woolery were added to the attack and Mugabi moved upfield.  At last Motherwell had an attacking formation.  The referee added three minutes and the equaliser appeared when Tierney popped up to smash the ball high into the net.

The goal earned a point and saved Alexander’s blushes.