Motherwell held on to Tony Watt’s first half goal to enjoy a 1-0 win against Dundee United in a deluge at Fir Park.

In horrendous conditions, the pitch was close to unplayable as the torrential rain swept across Fir Park from kick-off until the final whistle, the shining highlight was Tony Watt’s excellent curling shot after 12 minutes.  It won the game. 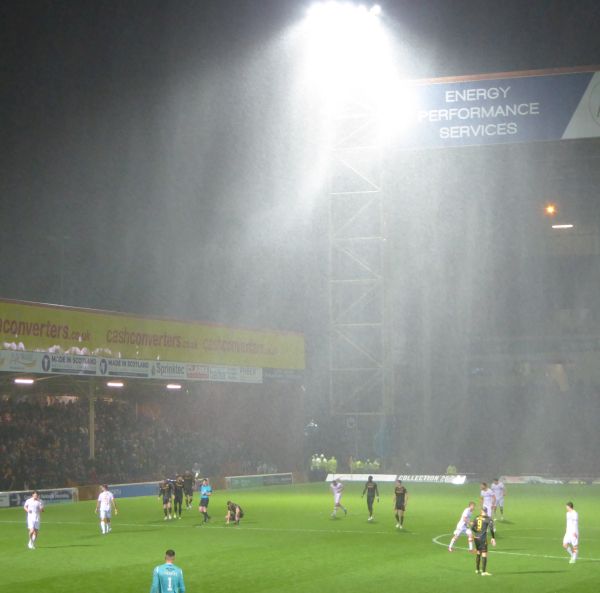 Sean Goss and Kevin Van Veen were restored to the starting eleven as Liam Grimshaw and Connor Shields dropped to the bench.  The home crowd was anxious to discover whether their favourites could shake off the disappointing performance in the previous game.  Their wishes were answered.  The manager was happy to report that the team had learned their lesson from Saturday.

For the bulk of the first half the ball stayed in the United half as Motherwell took the initiative.  The visitors never got their flowing game going and it was no surprise that the home team took the lead.

Motherwell took the ball off a United foot and Kaiyne Woolery, later to be awarded the man of the match award, moved forward and passed to his left.  The ball found its way to Watt at the left edge of the box and he curled his right foot shot over the outstretched arm of Siegrist and the net bulged.

The teams, each in their away strips, coped admirably with the worsening conditions although surface water posed an increasing irritant into the second half.

Goss had a pop just wide of the post at the start of the second half before more excellent work from Woolery gave Van Veen a chance to pivot and shoot by the post.

Sondre Solholm seemed to overstretch and had to be replaced by Stephen O’Donnell just before the hour.  Bevis Muugabi moved to fill the gap and completed another fine game.

The visitors earned a series of corner kicks but the threats were rebuffed.  Motherwell delivered a free kick that produced what looked like a two foot tap in at the far post for O’Donnell but he failed to kill the game off as his missed the touch.

The sliding tackles brought up sheets of water and Barry Maguire paid the price with a second yellow with ten minutes remaining.  Jake Carroll came on as Van Veen was relieved.

Motherwell are now within a point of United.