Motherwell stay up with 3-1 win over Kilmarnock

Goals from McHugh, Ainsworth and Frear opened the door for the 33rd straight season of top flight football at Fir Park with a 3-1 win over Kilmarnock.  Woohoo!

It was a tense evening in the Lanarkshire sunshine but a goal inside the first minute should have eased our concerns.  We seemed to lose focus and conceded a careless equaliser and the game was in the balance.  Relief came with a wonderful Ainsworth strike and a lovely late goal on the break from Frear and with cheering news from Dingwall we were able to avoid the play-off. 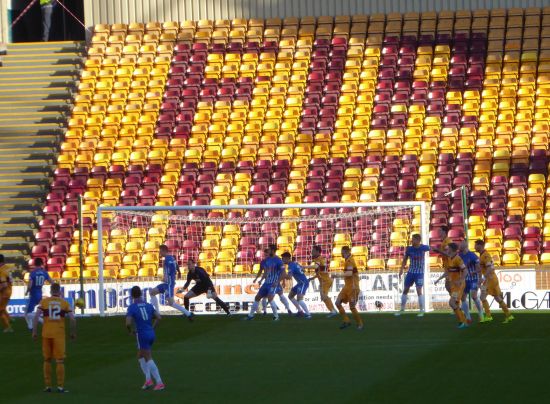 McHugh opens the scoring inside the first minute

We started with one change from the derby winning side as Ferguson replaced Campbell and a change in shape.  Ferguson took up the right back position in a four man defence but he was unlucky to find Jones in good form on Killie’s wing. After a torrid 37 minutes and a booking the manager made the necessary switch and sent on Ainsworth with Cadden dropping back.  It proved to be the turning point of the game.

The perfect start came when McHugh clipped in Frear’s low front post corner with forty seconds on the clock.  We kept up the pressure to such an extent that it took 15 minutes for the visitors to have a pop at our goal when Hawkshaw shot over the top from 20 yards.  They equalised within two minutes when our familiar lack lustre defence allowed Frizzell a shot.

We had lost the early momentum but Moult should have scored when he was clean through on MacDonald.  We got to the break needing a rethink.

Ainsworth and Frear added some much needed zip to our attack and ot was fitting that the pair would be our salvation.  Ainsworth lined up a free kick ten yards from the dead ball line at the edge of the box and rifled an unstoppable shot into the net.  It was a goal fit to win any game.

The third came when Ainsworth released moult on the right wing on the break.  Our talisman crossed to find Frear bursting through the centre and with a wonderful calmness he rounded the ‘keeper to roll the ball home and deliver is from the lottery of a play-off.

The crowd stayed to salute to thank the squad for their effort with the knowledge that the team will look very different when we next play at Fir Park.