Motherwell stroll into the final

Motherwell are in the Scottish Cup final for the first time in 20 years thanks to an impressive first half performance that tore St Johnstone apart with three classy goals.  We'll be back at Hampden at the end of May!

St Johnstone kicked off and faced the Motherwell end of the ground.  They were first into attack too and Randolph had to tip over a headed free kick inside two minutes.  Our reply was deadly.  Our first push up the left earned a corner and Haletey’s kick was headed home by Craigan.  It was the perfect start. 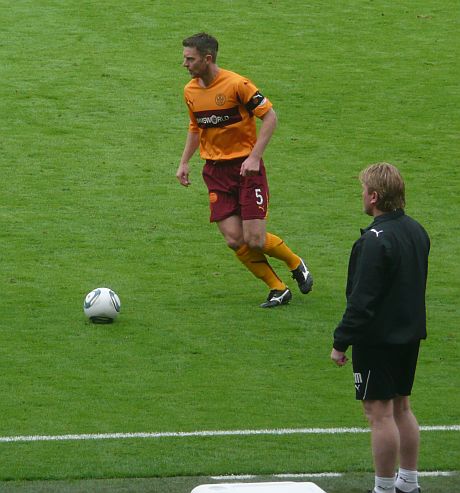 It got even better in 14 minutes when Murphy collected on the left and started one of his characteristic runs.  He cut inside and moved across the 18 yard line until he found a shooting opportunity.  He shot low and beat Enkleman at his right hand post.  Two up!

Our opponents, remarkably, continued to have most of the possession but they failed to create much.  Motherwell seemed to be m,ore dangerous when they moved forward and Lasley should have killed the contest before the half hour when he had the goal at his mercy.  Murphy then cut through the defence but he also fired wide.

After wasting a couple of cracking chances Sutton produced a fantastic strike from 25 yards.  Enckleman was at full stretch and got a hand to it but he couldn’t stop the ball from hitting the net.  Half time arrived and we had a three goal lead.

St Johnstone replaced Samuel with Robertson after the break as they tried to find a way back into the game but their early efforts were easily snuffed out by Randolph’s safe hands.

The second period had few moments to excite the crowd of 11,920 (just the way we wanted it!).  McCall used all three substitutes Jeffers, Jennings and Humphrey making way for McHugh, Ross and Jones as we shut up shop.  Jennings had already taken his mandatory booking and it seemed that Mcall threw on the others for some Hampden experience.

Davidson gave the Perth fans a thrill when his header hit the bar but that was as good as it got for them.  Yet another failed attempt in a semi final.

The game petered out with our singing section reminding Craig Brown what he was missing!  We’ll be back at Hampden in a few weeks, no doubt with a bigger support as we try to emulate the feats last achieved in 1952 and 1991.