Motherwell huffed and puffed to a 1-0 win over Queen's Park with an uninspiring start to the League Cup campaign at Firhill.

After a three week pre-season behind them Motherwell look miles away from top gear.  Queen's Park lost a goal early in the first half and then tormented the Motherwell defence for the bulk of the game.  They will feel they deserved at least a point for their spirited effort. 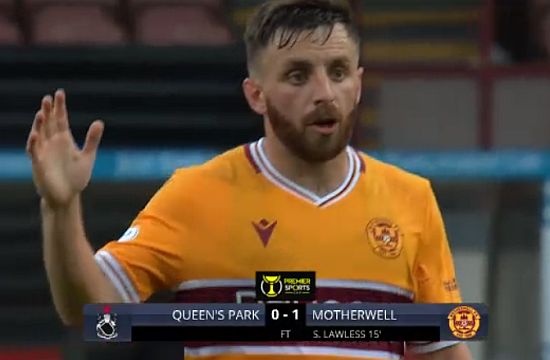 Darragh O'Connor and Ricki Lamie formed the centre back pairing with Stephen O'Donnell and Jake Carroll completing the back line.  A midfield of Barry Maguire, Robbie Crawford and Dean Cornelius supported a striking trio of Tony Watt, Kaiyne Woolery and Steven Lawless.  Only two were wearing claret and amber for the first time.

After a tentative opening from both sides Motherwell opened their season's account after 14 minutes.  Barry Maguire was the creator with a midfield run and powerful shot from 20 yards.  Willie Muir failed to hold and Maguire, having continued the run, back-heeled to Tony Watt.   The ball was passed to Steven Lawless and the goal came off the post.

Thoughts that the early goal might have allowed the senior side to take control were soon banished as The Spiders produced the better football for the remainder of the half.

Simon Murray provided the main threat to Liam Kelly's goal and he had three half chances to punish the well defence.  He was helped by the obvious rustiness on show from the visitors.  Fortunately the slackness was not punished and Graham Alexander had a chance to talk to his men at the break with the goal advantage intact.

The same eleven restarted the game but the same pattern persisted.  Kelly had to produce a fine save to deny Murray after Ricki Lamie was embarrassed in midfield.  It was with some relief that we saw Murray substituted with twenty minutes remaining.

Tony Watt had a excellent opportunity when he broke through but his shot from 15 yards was saved.  Maguire followed that up with a drive just wide of the post.

Liam Donnelly and Kevin Van Veen were given a late run and it may be that the get more minutes when Queen of the South come to Fir Park on Saturday.