Motherwell struggle but reach the next round

Motherwell played poorly but progressed to the fifth round after winning a penalty shootout against unlucky Morton.

For most of the game there was little to choose between the teams and the visitors were fully entitled to have a ticket in the lottery of the shootout.  Attention now turns to the meeting of Stranraer and Hibs to discover the opponents in the quarter final.

The injury to Jordan Roberts made room for Barry Maguire to join the starting eleven.  Morton got the game underway and they faced the Cooper end. 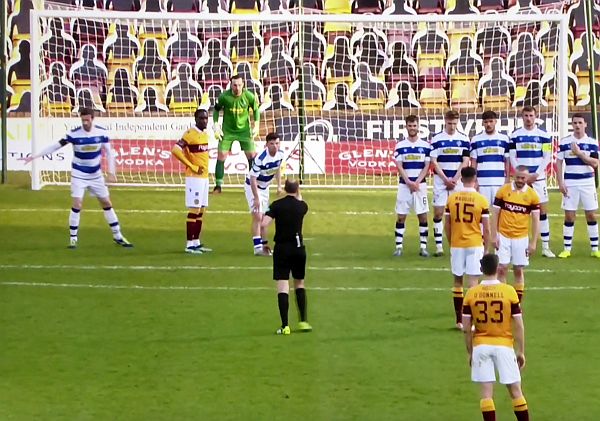 The visitors had the better of the goalless first half although Motherwell were pressing for the opener before Willie Collum sent the teams into the stand.  Motherwell had a ponderous air about them as they mixed slow possession with the occasional long ball.

The first goal scoring opportunity fell to Morton when Reece Lyon found only Liam Kelly barring his way to goal.  The 'keeper won the dual with a block but the hosts had to heed the warning.

Barry Maguire collected a short free kick and volleyed against the defence from 25 yards but the visiting 'keeper had no shots to stop in the first 45 minutes.  Some strong words were needed.

Christopher Long tested McAdams two minutes into the second period and soon Devante Cole flashed an attempt just wide of the post.  The big striker was having an increased influence as the Morton defence was kept busy.

The pressure did not bear fruit as chances were not forthcoming.  Long tried a few speculative efforts but the visitors took heart as extra-time began to seem likely.  Jake Hastie replaced Maguire inside the last ten minutes but after 90 minutes the teams were level.

Hastie showed some of his old power with a fine run through midfield to set up Long.  With a few steps he had a clear sight of the target but fired against the post.  Allan Campbell the released Hastie but his show was pulled wide.

It seemed that a winner had arrived when Stephen O'Donnell produced an outrageous goal.  He had a dig from 30 yards and with the help of a slight deflection the ball nestled in the corner of the net.

What followed was a complete disaster.  Morton earned a last gasp corner and Fjortoff rose unchallenged to head in the equaliser that sent the game into penalties.