Motherwell stumble to the bottom

Motherwell managed to lose to Hamilton and now lie at the bottom of the league table.  The second half volley from substitute Boyd gave our rivals a lead they hardly deserved but some serious soul searching needs to be done in Stephen Robinson’s squad. 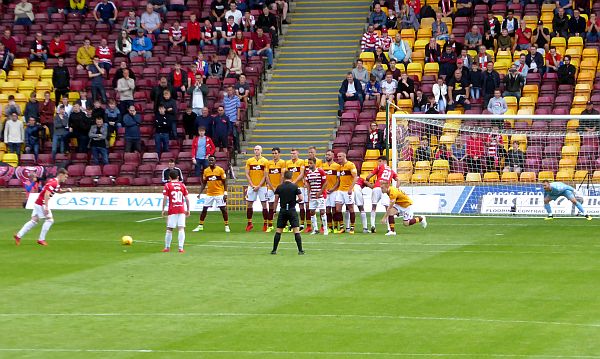 Regardless of the outcome it was a poor football spectacle that was served up in front of the 4,807 fans.  The ball spent most of its time in the air in the Accie’s half but we rarely placed any pressure on the visiting ’keeper.

We made three changes following the defeat at Easter Road. Aldred, Campbell and Bigirimana made the starting eleven as Taylor-Sinclair, Grimshaw and Donnelly stood down.

What little threat we had came via Cadden on the right wing but the main thrust came from long balls that were powered from back to front.  The Hamilton defence coped well and we reached the break hoping for better fare in the second period.

He game improved early in the second period and we created a few chances.  Campbell burst though the centre to set Main up but his shot was wide of the post.  Bigirimana, the nominated dead ball taker of the day, fired in a free kick that had Woods scrambling to concede a corner.

All the play was in front of the Cooper stand but our front men failed to create clear chances in the crowded area.  Campbell and Tait were sacrificed as Frear and Johnson were given an opportunity to shine.  Accies responded with their own double substitutions and reaped the benefit.

Cunningham’s free kick struck the Motherwell wall and the ball fell toward Boyd.  His volley from twenty plus yards flew into the net with Casron unable to get close.  It was the visitors second shot on target and it won the game.

The goal gave heart to the red and whites and despite much huffing and puffing, we never looked like closing the gap.  Indeed, in the second minute of added time Cunningham contrived to miss when a breakaway presented him with a simple tap in.

The manager felt it was hard to be critical of his players but many of the home fans would argue that the long ball tactic was doomed to fail against a well drilled and motivated defence.  Robinson admitted that at times we lacked patience and made poor decisions.  “We had lots of possession but that doesn’t win football matches”, too true.