All Motherwell did was defend the box for most of the game and score with the two chances that came in the second half.  Aberdeen will find their defeat hard to take as they dominated the game but as the old saying goes "goals change games" and Van Veen's double sends Motherwell up to fifth place in the table. 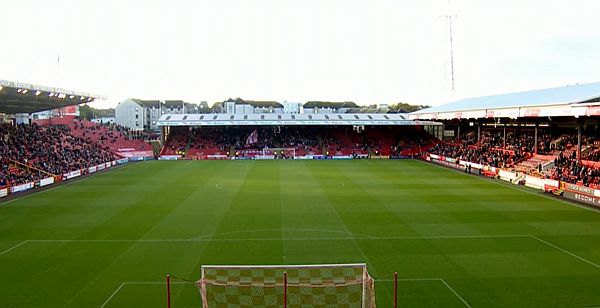 Motherwell's determination to limit the home side's control was evident from the start and a couple of fouls were conceded inside the opening 90 seconds.  That pattern continued and three booking were awarded to the black shirted visitors after half an hour.  A further two arrived in the second half.

The break was reached without loss due to a combination of Liam Kelly's saves, indifferent finishing and good luck.  Joe Lewis had no saves to make and were only a couple of harmless crosses found their way into his area.

Motherwell got the second half underway and surprised everyone in the stadium by taking the lead after five minutes.  A spell of pressure ended with the ball at the feet of Sean Goss 25 yards out on the left wing.  He found Van Veen close to the angle of the six yard box and the striker flicked the ball beyond Lewis.

It was to get better.  With 57 minutes on the clock Don Robertson awarded a free kick not far outside the penalty area.  After a lengthy huddle Goss floated the ball to the back post where Ricki Lamie (on for the injured Ojala) headed across goal and KVV netted his second with a close range volley.

The goals knocked the heart out of the home side though they continued to have the bulk of possession.  Tony Watt was replaced by Jake Carroll as the manager bulked up his defence.

Kelly produced an incredible effort to protect his goal.  At full stretch he managed to parry a shot on to the post but the ball rebounded.  Under pressure he lifted the ball off his leg then palmed the ball away to safety.

The clock ran down and the points and a happy squad made their way south.  They team can enjoy a few days off over the international break before preparations begin for the visit of Hearts on 20 November.