Motherwell overcame a first half deficit with goals from McHugh and Jules to take three vital points with a 2-1 win at Rugby Park.

The game had a nailbiting finish when Boyd's penalty came off the post but the three points felt like a lifeline to a team that had fallen behind in the first half. Robinson will enjoy much credit for bold half-time substitutions. 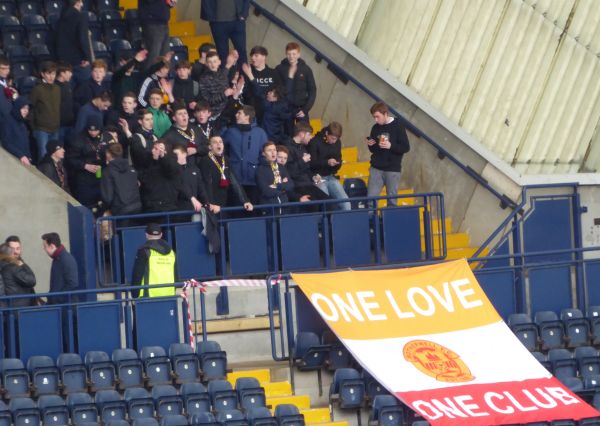 The Motherwell side had a more familiar look with the return of Lasley, Tait and Hammell back on duty. Jukes retained his place and he had the company of McHugh in a three at the back formation. Chalmers, McMilland and Clay lost out.

We started strongly with plenty of determination and urgency on show, so much that it took more than ten minutes for Kilmarnock to get a ball into our box.

The home side came close to the opene when Kris Boyd rattled our bar. Cadden appeared at the other end a minute later to test Woodman with a fine shot from the edge of the box with Tait the provider.

Sammon and Longstaff helpethe balance of play swing in the home side's favour and in 32 minutes Kris Boyd used his strength to hold of his marker to poke the ball beyond Samson.

With the break approaching Tait overhit a cross and Hammell managed to collect at the left corner. McDonald got a near post flick at the cross but the 'keeper made the stop.

Our caretaker made a big decision at half-time and replaced Lasley and Hammell with Bowman and Frear. The switch produced a reward after 53 minutes when a Frear corner was headed down by Moult. McHugh was on hand to blast high into the net.

Dicker fired a rocket from 30 yards that shook the bar as the game swung from end. A Bowman dummy on the 18 yard line gave McDonald a chance but his low attempt to the corner was saved.

Tait limped off as Ferguson came on with 15 minutes left. Barely have the change been made when McDonald earned a free kick. The ball was foated into the crowded box and Zak Jules reacted to score. Cue a chorus of Twist and Shout from the stand behind that goal.

Some frantic defending was needed as Kilmarnock pressed to get back into the game and they had a glorious chance as Frear was penalised in the 89th minute. Boyd's penalty kick strurck the post and we were delivered of a hugely important three points.