Motherwell stormed into the fifth round of the cup with a surprisingly simple 4-0 win at Dens Park. A John Sutton double and a late pair of goals from Steve Jennings and Jamie Murphy did the damage. 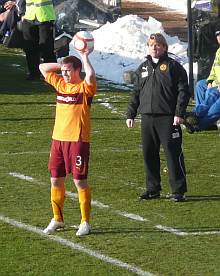 After six games without a victory confidence would have been in short supply but one way to reignite it is to score after three minutes.  And it was a lovely goal too.  Stevie Hammell played a tempting ball down the left wing to Jamie Murphy who beat his man and delivered a low cross for John Sutton to poke the ball home.

A spell of corners midway through the half provided Sutton a chance to double his tally but a fine reflex save from Rab Douglas stopped him in his tracks.  From that spate of corners Dundee broke and Leigh Griffiths looked to be in on goal but an offside flag came to Motherwell’s rescue.  In any event, he did fire his shot wide.

Without Motherwell creating any more,  the remainder of the first half belonged to Dundee.

The second half started exactly the same way as the first.  Three minutes in and a perfect Murphy ball found Sutton who was one on one with Douglas and he took a touch before lashing the ball into the goalie’s bottom left hand corner.

The second goal forced Dundee to have a go but the expected siege came only in possession and territory but not in chances.  This was mainly down to the keen pressing game McCall employed and an outstanding performance by Stephen Craigain.

A flashpoint came mid-way through the half when a late challenge floored Mark Reynolds which led to the culprit being booked as well as Darren Randolph and Steven Jennings for their reaction.

As the game wore on ball retention came more of a concern than creating the killer chance.  But a lengthy spell of possession on the right hand side allowed Tom Hateley to deliver a cross which was planted onto Jennings’ forehead and his header powered its way past Douglas. 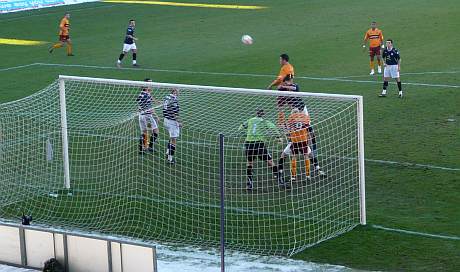 Sutton forces a good save from Douglas with a header

The visiting support jokingly chanted that Jennings had bet last scorer but if he had, he had forgotten to tell Jamie Murphy who picked up a pass from Hammell and delivered a goal that was a carbon copy of Sutton’s second.  Hammell was fouled in the build up and referee Steve Conroy takes credit for allowing the advantage and then going back to book the instigator as the ‘Well players celebrated.

One more talking point was the straight red card dished out to Leigh Griffiths for a horrible lunge on Hammell.  For a player who is talked up so often it was a bad end.  He really delivered nothing like the promise we expected and the scouts in the stand must have been wondering what the fuss was about.

We can now look forward to Tuesday’s draw for round five while Dundee can count the reward for the presence of Sky on top of the news that their Dee 4 Life campaign has burst the £200,000 mark.  Considering those financial efforts and their fans’ efforts in clearing the pitch today it’s good to see a club’s fans who clearly care so much and we come down the road wishing them nothing but the best in their quest for survival.