Motherwell take only a point against Aberdeen

Motherwell and Aberdeen played out a bruising 1-1 draw at Fir Park.  The visitors’ first half goal was cancelled by Mark O’Hara in the second.

It was a game that Motherwell dominated for long spells but the inability to convert pressure into goals cost a couple of points.  A first half injury to Kevin Van Veen’s shoulder probably let Aberdeen off the hook. 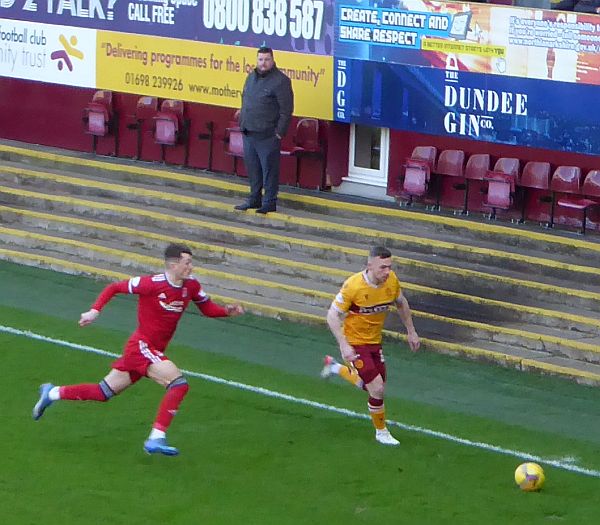 Graham Alexander opted for a ‘same again’ approach both for selection and strategy.  Aberdeen got the game underway with Motherwell, for the second consecutive game electing to face the Cooper end for the opening half.

Following a testing free kick from Lewis Stevenson in the second minute Motherwell piled the heat on the Dons’ goal.  Corner kicks and free kicks gave opportunities but there was no early goal.

Midway through the first period Van Veen took a tumble as he competed for the ball with Joe Lewis and there was a delay as he received treatment for a knock to his shoulder.  He soldiered on for the rest of the game but was clearly impeded.  The post match interview indicated that he was determined to stay involved but he was hugely restricted in movement.

However, Van Veen came close on two occasions before the break.  His block on the casual ‘keeper missed the goal by a foot and as half-time beckoned he hit the inside of the post with a 25 yard free kick.

Aberdeen’s goal will not make happy viewing for Bevis Mugabi.  The defender, with a newly extended contract, was not at his best when a ball over his head allowed Adam Montgomery to collect and run into the box.  He found Vicente Besuijen for the easy finish.

Motherwell picked up their challenge in the second half and rarely let Aberdeen into the game.  The ball was in front of the Tommy MacLean stand for long spells as the red shirts were forced to the back foot.

Van Veen was able to turn and let loose a shot from an acute angle at Lewis before a double substitution on the hour.  The catalyst was the addition of Kaiyne Woolery.  The nippy winger took station on the right flank and caused lots of problems for the visiting defence.

His reward came in 68 minutes when he collected a long pass from fellow substitute Ricki Lamie.  The pass found Van Veen then the ball spilled from Lewis allowing Mark O’Hara to find the net.

The press for a winner was unsuccessful and Motherwell had to settle for a point.  Three wins and a draw against Aberdeen is a great return and the point maintains the fight for a top half finish.

Next up is a trip to Ibrox next Sunday.