An outstanding 3-0 win at Pittodrie lifted Motherwell off the bottom of the table.

Fans of claret and amber are well used to the unpredictability of their favourites but none would have dreamt that Motherwell would have a three goal lead after 25 minutes.  That stirring first half show was backed up by a hard working effort in the second period to snuff out any chance of an unlikely comeback.

Allan Campbell was superb, chasing and hounding in midfield.  Bevis Mugabi paired solid defending with a goal at the other end.

Motherwell took to the sunny Pittodrie pitch sporting the blue away strip with two changes from the eleven that overcame Coleraine on Thursday.  Christopher Long and Liam Grimshaw were called as Callum Lang and Nathan McGinley made way.

They attacked the beach end goal and were two up inside the first ten minutes. 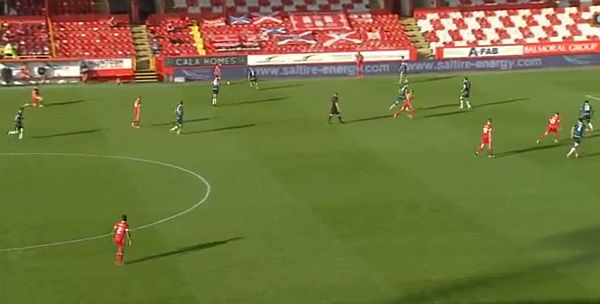 Marley Watkins raised a hand while defending a 'Well free kick and a penalty was awarded.  Mark O'Hara, as he did at The Showgrounds, smashed the ball into the net to take the lead after 4 minutes.

Joe Lewis set us up for the second with an awful attempted pass that gave Long the ball 25 yards from goal.  He took a few steps and passed the ball into the net.

The home side were rattled and shaky in defence.  A central charge from Campbell forced Lewis to concede a corner.  Liam Polworth delivered and Mugabi rose to deliver a three goal lead halfway through the first period with a header.

Aberdeen came close to a lifeline a couple of minutes before the break.  Watkins saw his header hit the post but that was the only scare they managed to create as Motherwell had dominated the half.

It was not a surprise that three red shirted substitutes appeared as the game resumed but the changes were not enough to turn the match.

The second forty five minutes presented a fairly even contest.  Neither ‘keeper was much involved as chances were few.  Motherwell maintained concentration and played out the game largely untroubled.

It has been some since a return to Lanarkshire came with such a margin of victory and the team can look forward to the upcoming trip to Israel on the back of three successive wins.