Motherwell triumph in Dingwall and move up to fifth

Kevin Van Veen came on as a second half substitute to earn and convert a penalty that moves Motherwell into a qualification spot.  The upcoming midweek meeting with Hearts is now huge. 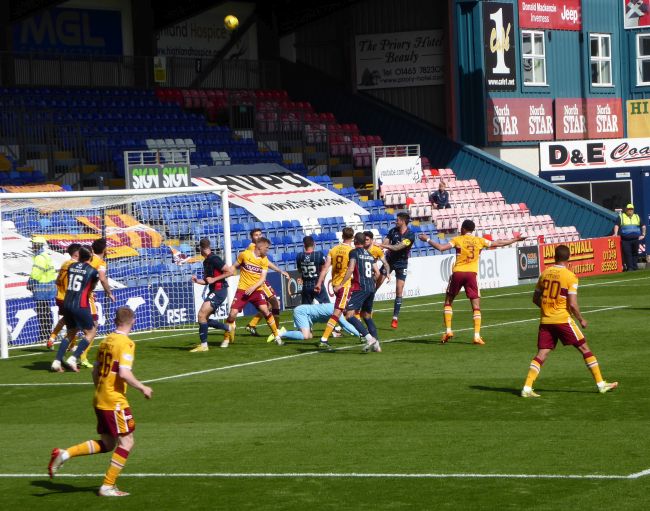 Donnelly dropped into the back line to partner Juhanu Ojala and Ricki Lamie in the centre of defence.  Ross Tierney had Connor Shields and Efford for company at the other end.

The home side started well and forced three corners inside the first five minutes.  Ojala entered David Munro’s book after 15 minutes as County kept up the pressure.  Liam Kelly made a comfortable catch from distance and Motherwell slowly can into the game.

Mark O’Hara pulled a shot wide from 15 yards before an encouraging last ten minutes before the break.  Efford saw a decent effort pushed for a corner by Ross Laidlaw and that led to a header from Shield that landed on the roof of the net. 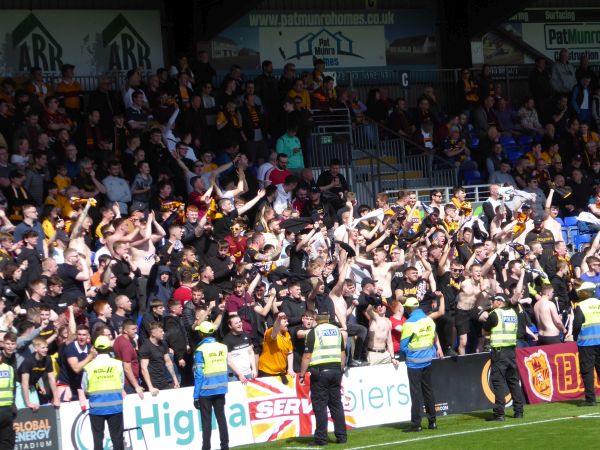 Motherwell survived a few early scares in the second period.  David Canola tried his luck and Jordan White and Blair Spittal pitched in.  The vocal ‘Well choir had been singing Kevin Van Veen’s praises as he warmed up on the sidelines and just after the hour they got their wish when he and Slattery came off the bench.  Within two minutes we had a penalty.

Shields crossed to the big striker and he was challenged by Alex Iacovitti.  The referee pointed to the spot and in front of his fans Van Veen rolled the ball into the net.

Ross County threw all forward as Motherwell dug in.    More defensive substitutions were made and the fourth official indicated a 5 minute addition.  Kelly produced a finger tip save three minutes after the 90.

The ‘Well crowd burst into Twist ‘n Shout as the final whistle brought joy and relief.  Check those passports.