Motherwell led the game for half an hour but then crumbled to a Rangers avalanche.  It finished 1-6.

Bevis Mugabi gave us some early hope with his goal but the siege laid on Liam Kelly’s goal looked certain to bring the visitors success.  It was unfortunate to concede twice with the break in sight but Motherwell were unable to change the pattern in the second half as Rangers piled on the pressure. 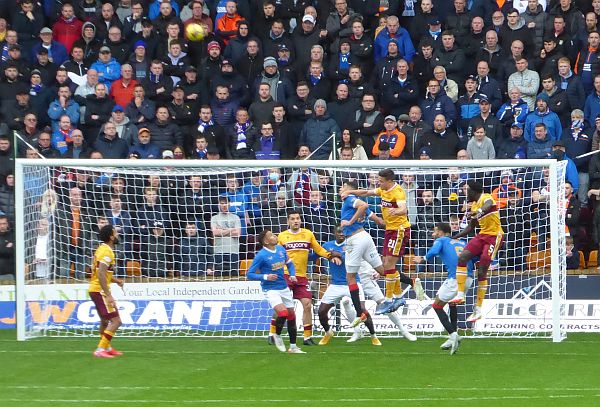 There was an indication that the home defence was not at ease right from the start.  Nathan McGinley hoisted a clearance high over the Hunter stand ten seconds into the game then Stephen O’Donnell earned a yellow card as he tried to recover from the first of several errors.  He was to pay dearly for the mistake later when he collected a second caution.

Motherwell’s one moment of joy came when the Rangers defence converted a harmless upfield punt into a corner.  Sondre Solholm forced Alan McGregor to parry a downward header and Mugabi fired the loose ball into the net from an acute angle.

For the rest of the half Rangers had the ‘Well defence pinned back.  Had they held out until the break there may have been a chance to regroup but two goals were conceded in the 43rd and 45th minutes.  The first came with a well struck drive from Tavernier and the second from a Sakala header.

There was no change to the home side’s tactics when they faced the Cooper end.  Connor Shields, Jordan Roberts and Tony Watt spent most of the time as auxiliary defenders as play surged to Kelly’s goal.  The midfielders developed a nasty habit of passing to the wrong jerseys.

Sakala’s strike just after the hour defected past Kelly to end any outside hope of a revival, O’Donnell earned his second yellow and the task became one of damage limitation.  And that did not succeed.

Kamara, Sakala and Roofe ended the rout as Motherwell were dismantled.

The early promise of the season now seems like a distand memory.  One point has been captured from the last five attempts and a trip to Pittodrie looms ahead of the next international break.