Motherwell were taken apart by a decent Hibs side and in the end we were fortunate to escape with a 3-0 defeat.  Our weakened team carried a threat only in the second half when our hosts took their feet off the gas.

With too many first team regulars missing the manager fielded Taylor-Sinclair, Grimshaw and Donnelly in place of the departed Kipré, suspended Campbell and Frear.  The upshot was a back four of Taylor-Sinclair, Hartley, Donnelly and Tait with a diamond shaped midfield.  Sammon and Main led the line. 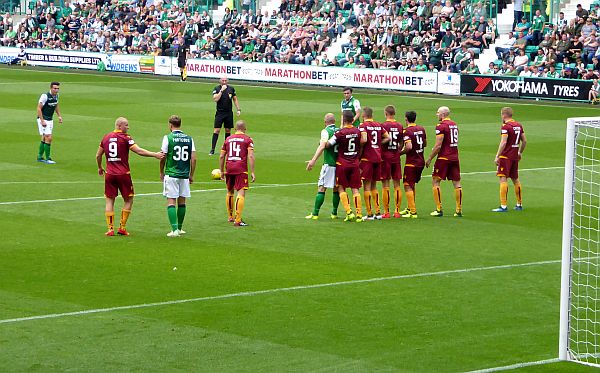 We lost the opener to this free kick

McHugh had a hesitant start made worse by a booking after 6 minutes.  That cramped his style a bit for the remainder of the afternoon.

We survived early pressure and the game settled into a midfield exchange.  We rarely appeared in the far penalty are but Hibs looked more composed as they pushed forward.  They were fortunate to win a free kick on the half hour and took advantage.  Mallon loosed an ambitious 30 yard effort and the ball struck Hartley at the edge of our area.  Bobby Madden hesitated then penalised the captain for a hand ball booking him in the process.  Mallon struck the dead ball low to Carson’s left corner and into the net.

Confidence flowed through the Hibs side and we fought hard to thwart them but rarely created any attacks.  As half-time drew near McGinn set up Shaw with a pas that cut out Taylor-Sinclair.  He got the ball beyond Carson at the post to give us a two goal deficit at the break.

Robinson responded with a double substitution as Taylor-Sinclair and Grimshaw remained in the dressing room.  Bigirimana and Frear came on as we changed shape with McHugh dropping back to the middle of a back three.

Before we had settled into the change Boyle was invited to run along the 18 yeard line before he swivelled and shot to Carson’s right.  We were three down and out of the contest.

Hibs eased up and we started to make some progress but there was no serious threat to Bogdan’s goal until Johnson was presented with a couple of golden opportunities after he appeared as a substitute for Main on the hour.

He nipped in between the central defenders and into the area.  His attempt beat the ‘keeper but crossed the goal off the post.  There was a second attempt blocked on the line.  The same player was clean through on  the 80th minute but his shot hit Bogdan’s midriff.

Johnson did finally have the ball in the net only to have it chalked off for a possible handball.  Nae luck.

We meet Hamilton next week and we’ll be in trouble if we can’t fashion a more recognisable shape moving forward.