Motherwell lost 2-0 at Easter Road and with it goes the outside chance of a late charge into the top half of the table.  Hibs worked hard for their win, snuffed out our attacking threat and with two first half goals deserved the three points.

Yet again Stephen Robinson was able to select his regular starters but it soon became clear that the home side would carry the day.  They countered our wing play and seemed quicker on the ball.  The contest was over by half time. 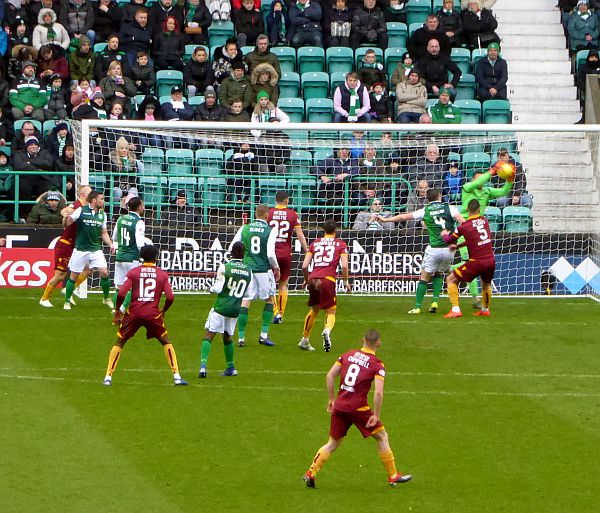 Hibs got the game underway but within seconds we produced what was to be our best chance in the first half.  Gboly Ariyibi skinned Gray and from the dead ball line delivered a dangerous low cross.  Stevenson was forced into a risky clearance and hit his post but we could not scramble the ball into the net.

That flourish was as good as it got as the home side took control.  Mallan tested Mark Gillespie from long range taking advantage of the wet conditions.  David Turnbull was to repay the compliment from 30 yards but his effort sailed high and wide.

The first goal came with a McNulty penalty after 20 minutes.  Tom Aldred conceded a hand ball inside his six yard box and Gillespie was given no chance with the spot kick.

The deficit doubled five minutes before he break when Gray rose to direct a powerful header into our net following a corner on our right.

We had plenty of possession in the second period but Hibs were comfortable.  Whether defending wide or centrally they kept us well away from dangerous areas.  The inclusion of James Scott, Elliott Frear then Danny Johnson made little difference.

Hibs spurned a couple of glorious chances before we finished the game as it started.  Aldred forced Marciano into a good stop from a corner before Johnson failed to find the net with a couple of golden opportunities in added time.

We have a couple of weeks to tale stock before St Johnstone come to Fir Park.