Motherwell win by two in Dumbarton

Motherwell had to work hard to overcome defensive Dumbarton but goals from Christian Ilic and Peter Hartley, one in each half, delivered a group topping 2-0 win. 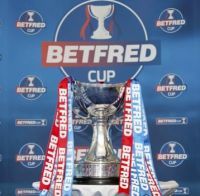 The long grass and sterling work by the defenders of the rock almost kept the score level by the break but a disputed goal in 40 minutes broke the deadlock.  Polworth had a decent shot parried and with James Scott in an offside position the assistant raised his flag.  The ball fell to Christian Ilic and he slammed it into the net as the flag was lowered.  We were one up and the Sons were not amused.

There had been little else of note to entertain the impressive travelling support.  Scott saw a looping header land on the bar and just before half-time Jermaine Hylton rattled the post. Dumbarton had rarely ventured into our half.

After five minutes of the second half Scott was replaced by Chris Long and ten minutes later Sherwin Seedorf came on as goalscorer Ilic was withdrawn.  Maguire came close with a header then Long frittered a chance when a good touch would have set up a shot.

Liam Polworth tested Pettigrew as he flicked Campbell’s shot but we scored the second a few minutes later when Hartley rose above the defence to head home a corner.  That signalled the third substitution, Jamie Semple on for Liam Polworth.

Group E of the Betfred Cup concludes on Saturday when Annan Athletic pay their first visit to Fir Park.