Motherwell win three in a row

Second half goals from Bowman and Moult delivered three points for Motherwell as Kilmarnock were beaten 2-0 at Fir Park.  After five games we hold fifth place in the league table.

Stephen Robinson will have a happy weekend after watching his charges performance in the second period.  His players showed the greater hunger than the opposition and deserved the win.  There were some excellent performances on show. 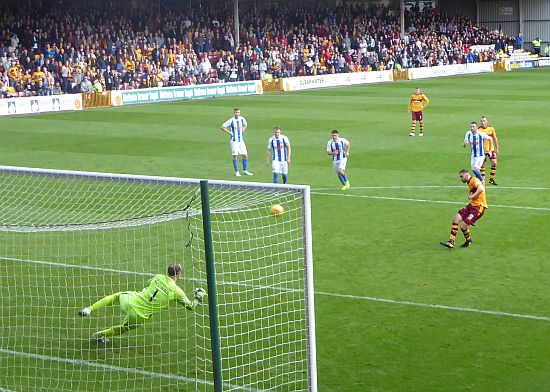 Hartley paired up with the impressive Kipré in central defence and showed a confident touch in the opening seconds when he cushioned a header back to Carson.  He showed no hesitation in taking command of the back line.  He made way for the combative Grimshaw after 75 minutes.

Campbell delivered a massive contribution, particularly in the second half.  He fought hard to break up any threat from the Kilmarnock ad set up a few attacks in the process.

The goal chances in the first half were thwarted by the exploits of Carson.  He got a good hand the ball when Brophy had an early effort and palmed a high ball following a corner from Thomas.

We made a change at the interval when Hammell replaced Dunne and just before the hour Bigirimana came on in place of Rose.  Kilmarnock were forced back and Moult had three chances in a five minute spell.  A 21 yard free kick was touched over by MacDonald, then Tait set him up for a couple of decent shots.

The opener seemed likely and it came following a fine midfield run by Bigirimana.  He delivered a perfect pass for Bowman and the shot beat the ‘keeper on his left.

Kilmarnock were poor and rarely looked like breaching our defence but there were a few anxious moments as we avoided letting them back into the game.

The points were sealed two minutes from time when Cadden fired across the face of goal.  Wilson fouled Bowman and Bobby Madden awarded a penalty.  Moult scored from the spot.

We will face a tougher test at Easter Road next week but with confidence growing we’ll be looking to make it four in a row.