Motherwell came out top of an exciting game against Hearts at Fir Park thanks to a late David Turnbull goal.  Jake Hastie’s opener was matched by a Stephen Naismith equaliser but the winner in added time stretches our winning run to six and restores seventh place.

For the fifth game in a row we were unchanged and set out to play the same free running, energetic passing game that has brought such success in recent weeks.  It did not take long for the new strategy to deliver. 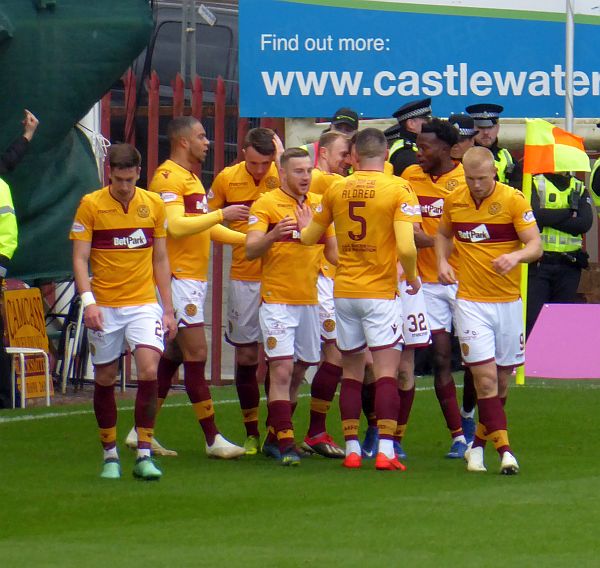 Jake Hastie is in there somewhere!

Curtis Main touched the ball to set up Hastie for a run into the box from the right.  Despite his few appearances the movement our young forward produced looked like his trademark.  He burst into the penalty area and delivered a shot that whistled beyond the ‘keeper to open the scoring.  The 1,000 visitors on the South stand had an excellent view of the wonderful goal.

We hardly needed the boost of the 12th minute goal to offer a lift in confidence as it was evident from he off that we were up for the fight.  Hearts offered plenty of threat of their own and the battle between the towering Ikpeazu and Tom Aldred raged on for 90 minutes.

Curtis Main was a constant irritation to the Hearts’ defence and Gboly Ariyibi showed his pace from the left wing.  Hastie fired another powerful shot but Doyle made the save.

Charles Dunne threw himself in the path of Clare’s on target effort before the game was levelled shortly before half time.  Naismith fluffed a close range chance and was fortunate to have a second opportunity.  He lifted the ball over Gillespie.

The second half saw the game rage from end to end.  Hearts took the more direct approach while we continued to pss and feed the ball along the wings.  Hastie robbed Mulraney and almost beat the ‘keeper at the post.

The contest seemed to be heading for a draw as we entered added time but there was drama to come.

Liam Grimshaw fell to a two footed challenge from Ben Garuccio and Nick Walsh flashed the red card.  The resulting free kick was set up 25 yards from goal and David Turnbull lined it up.  His effort was on target and Colin Doyle appeared to be in position to make the save.  The ball bounced in front of the red shirted ‘keeper and spun off his shoulder into the net.  As the guardian blushed, the home support erupted as the game was won.

The win completes a hugely impressive six in a row.  Now, can we keep the form going at Parkhead next Sunday?