Motherwell and Dundee played out a 1-1 draw in a Fir Park game that neither team deserved to win.

It was an afternoon devoid of entertainment as the ball was thundered high from one half to the other.  Hopeful headers and midfield scrambles full of misplaced passes killed any outbreak of football.  This showing would have shamed a Sunday league pub team. 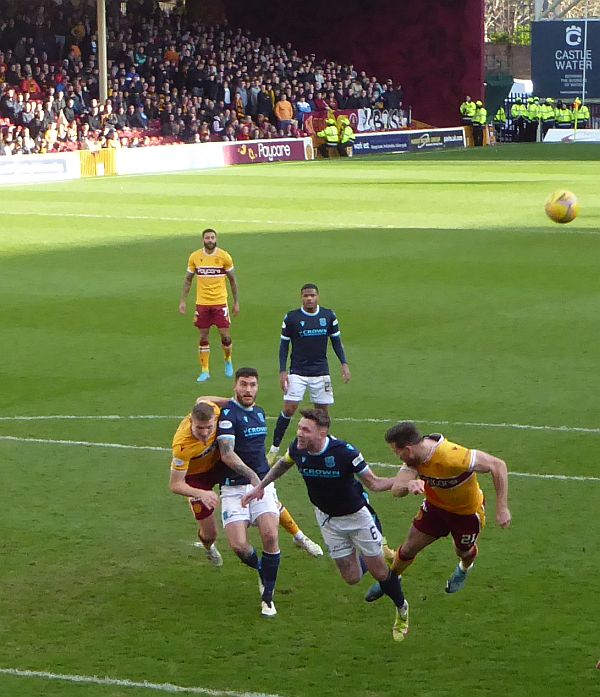 Juhani Ojala replaced Jake Carroll and Ricki Lamie moved wide.  Joe Efford was given a chance ahead of Connor Shields and the highlight for the American was to score his first in clartet and amber.

Stephen O’Donnell would be advised to avoid any replays of the early Dundee opener.  The defender was far from his international best and his hesitation with the ball at his feet gave Paul McMullan a chance.  The forward curled the ball beyond Liam Kelly after six minutes.

The leveller popped up ten minutes later following excellent hold up play by Kevin Van Veen.  With three defenders on his back he managed to squeeze the ball through for Efford. It took two attempts but the debut goal gave the home crowd some hope that a win might be possible.

Andrew Dallas will be embarrassed at his failure to punish a clear shove on Kaiyne Woolery on the edge of the penalty area.

Sadly, the rest of the game was goalless.  Motherwell seemed to have no other plan than to fire endless long balls forward in the hope of winning scraps.  A few opportunities came in front of the Cooper stand in the second half.

Mark O’Hara fired a low drive wide of target and Woolery set uo Van Veen for a turn and shot that missed the postage stamp corner.

A couple of substitutions added some freshness and Ross Tierney came close when he ran on to Van Veen’s clever flick.  In added time Woolery tested Dundee’s young ‘keeper but a draw between two poor teams was probably a fair outcome.

Motherwell’s long run without a league win continues and the side now sits in eighth place.  The home crowd showed their discomfort at the end not just for the result but for the shambles they had witnessed.