Motherwell's slump continues with a 2-0 loss to Kilmarnock

Motherwell end a dismal year with a dismal 2-0 loss to Kilmarnock at Fir Park.

Regular readers will be familiar with the story of the game.  Motherwell started fairly well but failed to convert.  Our opponents scored with their first serious goal attempt just before the break then we collapsed in the second half losing a penalty and a defender thanks to a red card.  Bring on the New Year! 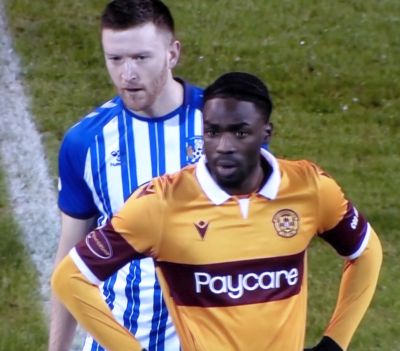 No goal for Cole

Callum Lang, soon to return to Wigan, was on the bench and Devante Cole was given his first start for a month

Motherwell had the better chances in the first half but conceded a couple of minutes before the break, sound familiar?

We got the game underway and attacked the South Stand goal and it was not long before Tony Watt got involved.  He popped up on either side of the Kilmarnock penalty box and Rogers had to be alert to cut out his shots.

Alan Campbell tried his luck from wide on the right but his low drive was inches wide of the left post.  Watt looped a header from fifteen yards, it beat the 'keeper but landed on the roof of the net.  At times Motherwell were guilty of giving up possession with failed long cross field passes.

Kilmarnock made occasional forays into our last third but Trevor Carson had little to do until called upon by Greg Kiltie two minutes from the break.  The forward collected in a central area just outside the box, turned, and shot low to open the scoring.

Hopes of a early revival in the second half were soon dashed.  Danny Whitehall latched on to a ball floated into the penalty area and Mark O'Hara grabbed him from behind. There was no doubt that the penalty award and the red card were correct decisions.  The young striker blasted the spot kick into the net.  That ended the contest, all that remained for Motherwell was to avoid total embarrassment.

The manager responded with a triple substitution.  Carson had needed earlier treatment on his knee and was replaced by Aaron Chapman.  Outfield changes removed Liam Grimshaw and Robbie Crawford as Callum Lang and Jake Carroll came on.

The defence was all at sea when the ball fell to Aaron Tshibola on the penalty spot.  He should have scored but Chapman made the save to save our blushes.

Jordan White came on as Cole was pulled but there was never any chance of a miracle recovery.

Motherwell have finished the year with a run of nine games without a win.