Kilmarnock took the spoils at Fir Park thanks to a long range strike in the first half.  Motherwell battled to recover but the visitors’ defence held out and we suffered the first home loss of the year.

With Kipré suspended Stephen Robinson choose to give Frear a start and set up his three man defence with Dunne, Aldred and Tait. 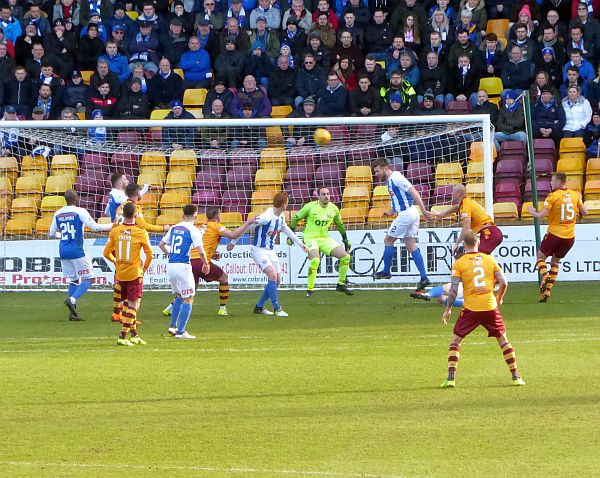 Tanner got the game underway and Kris Boyd soon popped up with the first chance of the afternoon.  The bulky striker took the ball on the turn and we were pleased to see his effort inches wide.

Frear then delivered one of his few crosses and Tanner at the near post flicked wide.  The winger is some way short of his best.

What proved to be the only goal of the game followed a decent spell of Motherwell possession.  The ball fell to O’Donnell and he tried his luck from 25+ yards with an accurate low drive that nestled in to Carson’s right hand corner.

Cadden then charged in to the away box but his effort across goal was the wrong choice as Tanner was available.

The second half was dominated by Motherwell’s unsuccessful attempts at breaching the solid blue and white defence.  We were unable to create clear scoring opportunities although Main looked like our only hope.  He created a few opportunities and was our best player.

There were several candidates for substitution as the manager tried to find the key that would unlock the defence but even the appearance of the masked Bowman could not produce an equaliser.

We failed the test and now Kilmarnock have a three point advantage and two games in hand.  The odds are now heavily against a top six finish.