Never say die 'Well come back to earn a point

A thrilling game at Easter Road ended with a 2-2 draw between Hibs and Motherwell.  Louis Moult was the hero as he scored twice to recover a two goal deficit.

There was no surprise in Motherwell's line-up as the manager choose the same eleven that began against Kilmarnock last week. Kipre, Hartley and Dunne were positioned at the back with Tait taking up the left midfield place. 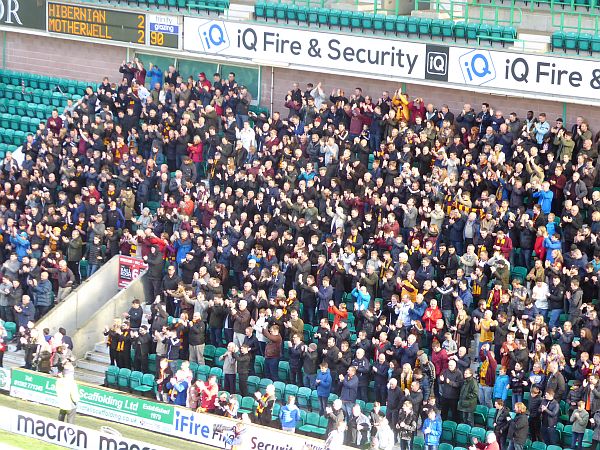 A boistrous start followed with the game sandwiched between competing drumbeats behind each goal. Carson floated a freekick into the opposition box but all that emerged was a delay as Ambrose got treatment.

Boyle was inches wide when he flicked a near post ball in 7 minutes nd at the other end Tait was booked for simulation. Carson took care before collecting the ball at the 18 yard line - memories of McDiarmid no doubt. Both sides pressed hard and the play raged from end to end.

Hibs got a breal midway though the half when Barry Cook decided that Dunne clipped Boyle and awarded a penalty. Stokes sent Carson the wrong way and scored from the spot.

Moult hit the bar three minutes later when it looked easier to convert Rose's squared pass. Bowman then fluffed a chance when Caddedn fed him from the right. Just before the break a Campbell shot from outside the box was heeled by McHugh but the 'keeper had a simple save. We reached the interval a goal down with Tait, McHugh and Moult in the referee's book.

Motherwell had a bright start to the second period as they pushed to the away fans but early optimism soon ended when Stkes scored his second in 55 minutes. We missed a chance to clear the ball but Stokes' persistance gave him a chance to shoot and be blasted high into the net. Robinson rected by replacing Rose with Tanner.

The switch delivered the desired result when Tanner sent in a free kick that Moult headed home.  We were back in the contest and might have levelled a minute later when Bowman had a double attempt blocked from close range.

But we were level in 73 minutes thanks to a fantastic strike from Moult. He collected at the edge of the box and unleashed a blast to Marciano's right.  Cue a lusty rendition of Twist and Shout.

Both teams kept up the high tempo till the end but it was the Motherwell support that cheered the final whistle.