No capital joy for Motherwell

Hearts got the only goal of a scrappy encounter at Tynecastle to beat a much weakened Motherwell team. We will need to hope that a few regulars return soon.

The ball spent more time in the air than on the ground in a game that rarely produced any decent football. There were very few shots onn target from either side but Lafferty found the net toward the end of the first half to send us home pointless. 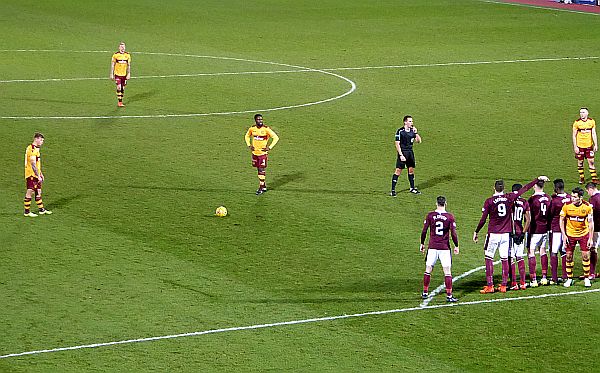 A rare threat on the opposition goal

Stephen Robinson was forced to make three injury enforced changes to his team. Moult, Carson and Hartley were missing so the door opened for Griffiths, Frear and Fisher. McHugh returned as Tanner made way. We had no goalkeeper on the bench.

The feature of the first period, excepting the goal, was the pair of substitutions. Hearts lost Walker and we lost Cadden and with them went any hope of a skillful game.

We set up with Dunne, McHugh and Kipre in a defensice three with Tait positioned on the right flank. The change of personnel had an obvious effect and although the players showed no lack of effort there was no sign of the rhythm that has served so well in previous matches.

The goal followed the substitution of Cadden. Campbell was challenged but no foul was awarded. Hearts collected the ball and sent it into the box to Lafferty. Kipre seemed to have him under control but the striker retained control and from the angle of the six yard box Griffiths was beaten.

We had more possession in the second half but created few chances. Bowman headed high from a corner, Tanner forced a save from a free kick and Kipre blasted over the top from 15 yards.

Hearts, in typical Levein style, throttled the game. Time was frittered away and their support was able to enjoy a first win in half a dozen games.

If none of the injured parties can return soon, we will struggle.