No goals and no football at Fir Park

This spectacle did nothing to brighten the wet and windy January chill.  A generous view would be that the conditions ruined the game but a more critical judgement would be that none of the players on show deserved a man of the match award. 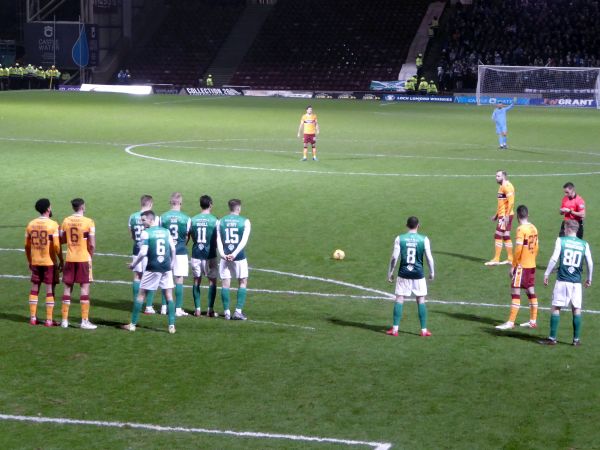 A second half attempt earns a corner

Kevin Van Veen started the match as Kaiyne Woolery dropped to the bench. Motherwell kicked off with backs to the Cooper Stand and were fortunate not to be behind within seconds.  A wind aided ball cleared the defensive line and Kevin Nisbet found himself charging in on goal.  Desperate defending saved the day although referee Dallas made his first error of the night by awarding a corner.

That early incident was as close as the visitors got to the home goal.  Liam Kelly was not forced to save a single shot all night.

Motherwell took the view that the chance of losing a goal was reduced if the ball was in the opponent’s half.  The result was that ball after ball was fired upfield in the hope that it would remain.  As often as not it did and there were a few half chances created.

Van Veen fired a 25 yard free kick at Macey before the best opportunity of the night arrived after half an hour.  A deep corner kick led to Connor Shields firing a powerful shot but the ‘keeper parried.  The ball fell to Van Veen but he shot high when a more accurate shot looked probable.

In the second half captain O’Donnell shot on target from a tight angle but Macey held it.

Liam Donnelly collected a second yellow and left the field with fifteen minutes remaining.  His manager followed him up the tunnel after some ill-judged comment to the officials.

Hibs were unable to take advantage despite throwing on four substitutes late on.  Alexander was forced to beef up for the expected onslaught by replacing substitute Ross Tierney with Callum Slattery.

There was no shortage of graft and commitment from those in claret and amber and, in the end, an important point was taken.  Fourth place is retained and plans for Saturday’s game at Tynecastle can be laid.

When the summary of the season is written this match will not rate a mention.