No Goals at Fir Park

Motherwell and Hibs produced a goalless draw at Fir Park in a game of few clear cut chances.

The visitors elected to hold their ground and hope for breakaway chances while Motherwell played a more positive passing probing game that failed to produce the end result that the balance of play might have deserved.  It was our first draw since the opening day of the league season at Livingston. 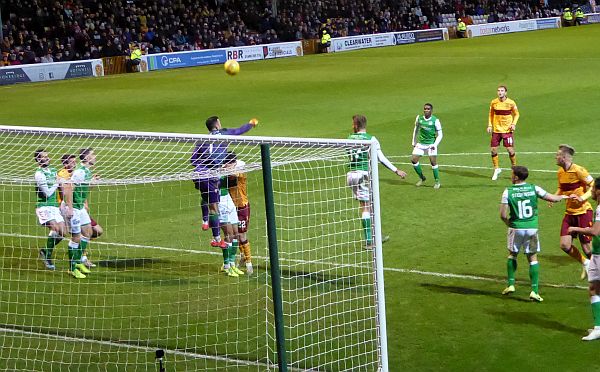 Chris Long and Mark O’Hara dropped out of the team making way for Ross MacIver and Christian Ilic.    Hibs took the kick off and attacked the Cooper end with both teams sporting their usual colours.

The opening minutes set the tone for the rest of the afternoon.  Hibs settled into a defensive formation content to cede possession until we moved into the last third.  James Scott gave the home support early hope with some threatening play on the left wing.

A foul on Ilic just outside the penalty area offered the best chance of a goal but Jake Carroll’s dead ball shot was comfortably held by Marciano.  Liam Polworth and Liam Donnelly followed that with long range efforts but both were high.  Mark Gillespie had an easy first forty five minutes.

Hibs gave us an fright early in the second period when we were exposed after a slack pass from Peter Hartley.  Gillespie did well to stop the shot but it gave Kamberi a golden chance with a close range header.  The ball struck the post and was cleared.

Stephen Robinson rang the changes and used all three substitutes.  Sherwin Seedorf, Christy Manzinga and Mikael Ndjoli provided fresh legs as we continued to have the majority of possession.  Manzinga gave us a thrill when he broke into the box to find the ball at his feet.  His shot was headed to Marciano’s top right corner but the ‘keeper got a touch and the ball cannoned off the bar.

The point is the least we deserved and stretches our third placed advantage to five points ahead of Aberdeen’s trip to Paisley on Sunday.

Next up is a tricky trip to Livingston.  A week’s rest and recovery will do no harm.