No Goals at Rugby Park

Motherwell and Kilmarnock were unable to produce a goal after a game and a half and the result of the rearranged fixture at Rugby Park was 0-0.

Any point away from home is welcome and Motherwell will be content after a hard fought match played out in wind and driving rain.  The home side may feel that the balance of play should have earned them three points but they were unable to breach our back line.  Mark Gillespie can be pleased with his clean sheet. 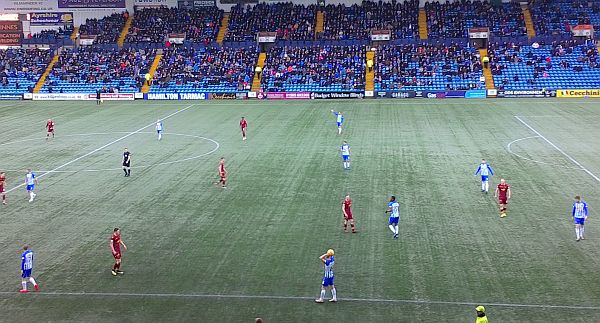 There was a sense of déjà vu as the teams emerged from the tunnel.  Motherwell were unchanged from the abandoned affair on Wednesday while Kilmarnock dropped Eamonn Brophy and Jordan Jones to the bench in favour of Rory McKenzie and Aaron Tshibola.

David Turnbull in the claret away strip got the game underway.  He was backed by 1,565 travelling fans who took advantage of the cut price offer.  We faced the strong wind and driving rain in the first period but despite the tough conditions there was plenty of football on show.

Coner McAleny made the wrong decision when he was though on Mark Gillespie early on.  With Chris Burke available for a simple tap in he chose to shoot wide.  Our first chance followed a corner from David Turnbull.  The ball eventually fell to captain Tait and the result was an overhead kick that forced a fumble from the Killie ‘keeper.  Jake Hastie tested Bachmann with a well struck curling shot and Gboly Ariyibi ended the half with a powerful shot on target.

The first thrill for the away fans in the second half followed a 57th minute corner that fell to the bandaged head of Tom Aldred a few yards from the far post.  The ball hit the ground and was immediately buried as players from both sides piled on top.  That said the pace after the halftime cuppas had dropped although the game remained competitive.

The home crowd were roused in 66 minutes when a weak clearance by Richard Tait was almost punished.  Rory McKenzie was unlucky to see his effort from the centre come off the bar.

Elliott Frear replaced Ariyibi with 20 minutes still on the clock and Brophy was introduced by Kilmarnock.  The home substitute was thwarted from an instant goal when Gillespie produced a fantastic one handed save from close range.  We were rebuffing wave after wave of blue and white attacks.

Some relief came thanks to a quick burst from Liam Grimshaw down the right wing but Bachmann caught the cross.

The game ended in a fierce squall and after a mercifully short period of added time John Beaton ended the the goalless affair.